It's never JUST a track workout. 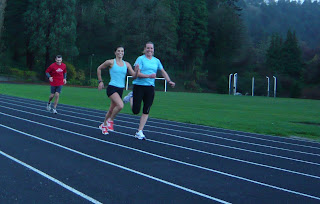 Yesterday I get a call from Kris and she says, "Are you running tomorrow"? Assuming she will have no interest I sheepishly say, "Yes, but I am on the track tomorrow". She cheerfully pipes back, "Can I go, it's just what I need"? Shocked I of course said, "Yes, please come"! So it's was a party at the track this morning. After yesterday's flooding rains in the Portland metro area it was great to wake up to 57 degrees and no rain. Perfect for the track! That meant tank tops, no gloves and no gale force winds, yeeeee hawwwww. These are hard enough for a girl who lacks leg speed and winds would just make my times slower. Not only did I have great company it was Tom's 49th birthday.....Happy Birthday Tom! We headed up Terrwilliger for the standard 30 minute warm-up then hit the track for 10X200 meters. I knew Kris would be a speed demon because I have run a stride workout with her before but she is out of control on the flat track.....load that girl down....stop the speeding car.....we were yelling all sorts of "slow down" phrases but she never let up. I think she actually tried to go slower but you can't take the natural speed out of a speedster, right! :). Tom and I keep trying to sign her up for 50K's and 50M races so she will be as slow as us and the blazing tri-athlete is nibbling hard on the entry forms. It was fun chasing her around the track but honestly there was no way I was going to be able to keep up with her for more than three at this distance. Between me yelling at Kris and Tom yelling at me to stop trying to keep up with Kris it was talkative group. All the 200's went perfect and all were consistent within 2 seconds so I call that good.

After the run we h 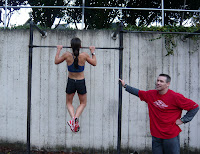 eaded over to the pull-up bar for the usual session with Kris game for all of it and Tom was there to do two things. First to hoist me up to the bar then stand there and yell......oops I mean motivate us to pull for our lives. Both of us did as many as we could with a wide arm grip then as many as we could with a narrow bicep grip. I was able to get 6 wide grip and 10 narrow grip. A small im 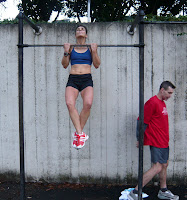 provement every week so I was happy. The picture on the right shows Tom's method of motivating....(I am not going to look until it's worthwhile so not until you give me at least 8)! I can't remember how many Kris whipped out but it was enough. She tried to get Tom to sho 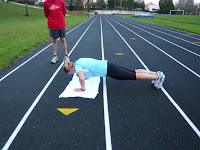 w us his pull-ups but that's just second nature for him and boring. He can do them with one arm so he wouldn't even show off! Then it was push-ups. First I needed to show Tom how well I am doing on my one-armed push-up and he was horrified. He said, "who showed how it's done"? I said, "no body, I saw it on TV and then U-Tube". He shook his head and then showed me proper form. I gave it another whirl and all he said, "keep working on it Ronda". What he was really trying to say was, "wow, there's a lot more work that needs to be done". But Kris was not off the hook. She had to get down and whip out push-ups and made the grade, whew........now off to the gym for a leg workout, I am glad Tom's not there to watch that. :)

So, today was a stellar day because my friends are so willing to indulge my training plan and join in. They push me and motivate me and I do the same for them, it's really special. With this 100K training and none of it being very "trail ultra type" I feel really fortunate to have such an amazing support group. Susan even offered to keep me company on her bike while I run like a freak in a circle for 27 miles! With all this support I need to make them proud. BTW, I have absolutely no idea how fast I can run a flat 100K???? Anybody got any good ideas on how to set a goal time here? I ran that flat 50M race 4-5 years ago at 8:30ish.......so I all ears for any ideas.
Posted by Ronda at 3:22 PM