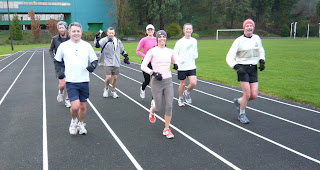 No more snow on the valley floor but there are threats on 3 inches for tomorrow. Don't they know Portlanders can't drive in any kind of frozen precipitation???? A little bit of fluffy stuff won't be able to stall this crowd. Tomorrow is 5-7 miles easy before the whopper Tempo workout on Friday....teee heeeeeee.

As you can see from the picture Campers were well represented at the track but I think I was the only one that wore track shoes. Darin was afraid his would get wet. :). Not one person sand bagged today, weeeelllllll I have to re-phrase that. Everyone worked hard but Micheal could be labeled a sandbagger. He ran behind me and at the end of oh I don't which 400 he pretended to breath hard but sounded more like Darth Vader so he quit pretending. Dave was again being an over achiever by doing mile repeats in the neighborhood of 6:10. Ohhhhhhhh!......Sean......Dave did mention he might be doing both 30 mile days.......the competition for over achiever is heating up. I can't wait to see who takes it. It was a blast watching Tom and Steve race around the track while Trisha came powering behind us but didn't yell, "track". I got in Dave's way not realizing a speed demon was buzzing down the inside lane. I followed Darin's pacing while Micheal goofed off behind me. ;) Lynn did her workout and then treated us all with homemade cookies! Awesome day Campers, thanks!

My 400's were perfectly consistent and right on the mark at 1:36 per. They were definitely not the easy breezy 1:33's I was doing last week because my 50K must still be swimming around in my muscles. Today's push ups were done in one set but they were hard. The sit ups.....I definitely over achieved here with 100 v-ups, 50 hanging knee-in's and 3X90 second planks. I did this during my leg workout with the Ultimate Fighter today. All the ab stuff was the rest portion.......yeah right....that is not rest! I am taking Kris with me on Friday after the tempo workout to meet the Ultimate Fighter and see if he can break her.........teeeee heeeeeee.
Onward Campers! Another day done and done nicely!
Posted by Ronda at 1:52 PM