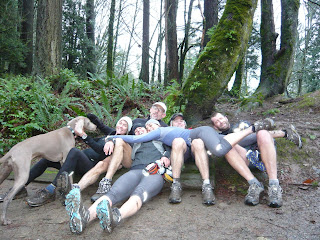 Dogpile!!!!!! We have got to stop having so much fun! Whew! The biggie is done......well the mini biggie, we still have the 30 mile Wildwood Race on Sunday but this was not easy. Even though the workout was challenging for me it wasn't hard because the group was exceptionally on task today and the Campers made it so fun. I felt my leg workout on Wednesday but it wasn't bad enough to slow me down but more like a mild reminder that my butt is very tired. Most of the group is speedier than I so chasing all these fit runners around is a great motivator for me. Pushing and running in the big group trying to keep step was super fun.....I want to do every tempo run!!!!! Micheal and Kris stuck with me the whole run and I worked hard to keep them by my side as they held a perfect pace. We were faster than goal on the first six m

iles then came in perfectly for the next three but were 4 seconds to slow on the last one....darn 4 seconds. These are Micheal, Kris and I stats.


After the run Kris and I rushed to the gym for our session with the Ultimate Fighter. He had us work together by creating sets where we needed to keep working until the other failed. For example, I would do bench presses while Kris would be doing incline pull ups. She had to keep going until I failed then we would switch with no rest. This was a blast and since we were both wiped out from the run it made all that much harder. By the end we were both sort of washed out and nauseous......the sign of a good workout. :). Then it was food, food, and more food! Awesome day Campers! Tomorrow is my day off as I prep the trail with supplies for Sunday's race.
Posted by Ronda at 3:16 PM