Down but not out!

Just as things were looking up in the health department Alex got the flu! The poor guy was so sick last night it broke our hearts watching him work through the nasty virus. He had friends over for a sleepover and Bill and I were just about ready to head for bed when he came running down stairs and said, "I think I am going to throw up"! Of course he doesn't make it all the way to the bathroom and it was clear his party was over. I call the parents and they can't get here fast enough when I told them Alex has the flu. By 10 p.m. we in the throws of it and poor Alex needed both of us right by his side for comfort. One of the great things about Alex is he can express clearly what he needs. Bill and I thought back at the number of times Alex has had the flu and with this event included it's been about 3 so he is not an expert. With his lack of experience it left us cleaning up a lot of messes, using every blanket, towel and sleeping bag we own.

Friday night was not going to be the restful night I planned to prepare me for the 30 mile pace run on today's schedule. At about 2:30 a.m. Bill says, "why don't you go upstairs and try to get some rest and I will take care of Alex". I protested but he insisted so off I went. I felt so incredibly guilty that I couldn't really sleep as my ear was keenly aware of what was going on down stairs. My alarm was set for 5 a.m. but I didn't need it because I was completely awake. Alex had finally stopped getting sick at about 4 a.m. and was fast asleep on our bathroom floor. I proceeded to get dressed gather my stuff and left the house to meet Stacey and Micheal for carpooling. The plan was to run the Springwater Cooridor which is another rails to trails project and the total length one way is 22 miles. We planned 3X10 mile out and backs as the pace was to increase every 10 miles. The pacing today was much slower than the other Hyper Pace Runs I have had so I was really looking forward to this more relaxed run. The pacing was to go like this: 10 miles at 9:15, 10 miles at 8:40 and the last 10 8:00-8:15. That seemed so doable in comparison but with the night we had I felt even those paces would proove challenging today.

It was raining/sleeting when we arrived at the trailhead near 7 a.m. but everyone was ready to go. Tom, Steve, Micheal, Stacey and I headed out for the first 5. It became really clear that the rain/sleet was COLD! Our faces were freezing as we tryed to carry on a conversation and within about 30 minutes our hands were numb. We had it all, hats, gloves, coats and Stacey even had hand warmers but nothing was going to touch the cold wet rain. The first 10 miles went fine and we were just under pace. When we got back to the car our hands were so frozen we needed to warm them up before we could leave. Everyone changed their clothes in an attempt to keep the body heat going and with that we left for the next 10. I wasn't feeling all that great but hey we are ultra runners and thrive on discomfort, beating the elements and the odds, right? I chanted this in my head as my body began to protest. All my joints were aching and my heart rate was skyrocketing. Generally I should be able to do about an 8:30 at 145-150 but today I was seeing 158 and higher and I wasn't even getting an 8:40! I was frozen to the bone and my hands were non-functioning making fueling a dreadful process. The weather was relentless but the company was great. When we reached the turn around at a total of 15 miles I knew my day was done at 20. There was no way I was going to be able to get anywhere near an 8:15! I don't think I could have even pulled an 8:30. I felt nauseaus and achy but again don't we all in a 100 miler? I gave myself a big talking to.....your stronger than this....pull it out girlfriend.....this is the last big push.....these paces should be easy! None of it was helping my stride and my HR continued to climb. Down and out! That is where I was and the sinus cold I battled earlier in the week wasn't much of an issue so that excuse went out the window.

So......what was supposed to be the shortest taper I have ever done may be my longest. :). This last 2 weeks have not been a highlight for training and certainly haven't helped my confidence for OC100K. But........I refuse to whine too much because I feel super lucky. Why???? First, I had 4 great friends who braved the elements today and kicked butt! Micheal, Stacey and Steve are probably driving home right now as they were strong both mentally and physically. Tom gave me a ride back to my car and he had just a great running day and he felt strong cranking out some fast miles. He pumped me up despite my lack of performance and perseverance. Then to top it off I came home and Bill had these beautiful flowers waiting for ME! The one who went to sleep while HE took care of Alex. He's the one who worked on our 12 loads of laundry, the one who gave me a huge hug when I came home knowing I would be bummed, the one who ALWAYS acts unselfish, more giving and strong than anyone I know, the one who works his A__ off to provide this wonderful life I get to live and he NEVER complains about a thing....he deserves the flowers! I took a look at the flowers and I said, "What are those for"? He said, "Because I love you". 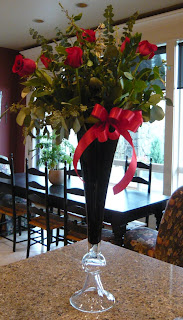 Not that this is supposed to be a mushy pity party but more of a "put it in perspective" post. A bad week, a couple of bad runs but like Kendra says, "it's just running". When you surround yourself with amazing people it's hard to stay down and out for long. In fact it makes any pity party I was thinking of having seem utterly silly and laughable in the big scheme of things. So......I will march on and get over myself immediately! :). It's days like these that make the good ones that much sweeter......better than chocolate. Now I am going to go watch "Die Hard With A Vengeance" and toughen up!

Trail work tomorrow out at Hagg Lake, power tools and brawn all day!
Posted by Ronda at 12:39 PM