Sneezing, stuffy head so you can rest medicine! 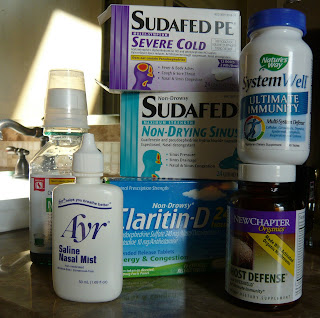 No....I don't need rehab.! Sunday night about 2 a.m. I was scrambling around the medicine drawer like a kid in the candy store. The only thing lacking was the happy elated look that appears on a kids face when they finally find the lolly pop of their dreams. My expresssion was more of a panic, please give me relief....I need help now. After my awesome race on Sunday where I felt like a machine primed and ready for action I was woken up in the middle of the night with completely plugged sinuses and sore throat along with aching ears. Sounds like a bad cold huh! Last week Alex came down with a nasty kid cold but like most kids he zoomed right through it feeling tip top in two days. For me......the story is always different. After being a cronic sinus infection sufferer in my mid 30's most likely brought on by 50+ work weeks, running way too much, being a mom and just plain stressing myself to the point of complete exhaustion then going to an ENT for serious help just to be told, "there is nothing wrong with you but your have tiny sinus passages so keep them clear and try to relieve your stress". So.........generally if I get a cold it rages into something requiring antibiotics and about 2.5 weeks before I feel normal. This pattern led me scrambling in the medicine drawer to find anything to clear the sinus passages. As you can see I was well armed with all sorts of stuff even those "sucker" herbal remedies....yes I know people swear they work but since it was 2 a.m. I opted for the Nyquil. Night, night!

I woke up feeling pretty crummy and opted to go the gym and run 2 miles really easy then sit in the suana to start some minor heat training. I came home and stuffed more pills down my mouth in the desperate attempt to keep my sinuses clear. The left side of my face was good but my right side was completely plugged including my ear leaving me yelling, "huh" to everyone that spoke to me. Since this was the beginning of a 10 day (new thing) cycle and the final touches to my training I knew I needed to get better FAST! Fear of doctors visits and antibiotics kept me spraying saline up my nose all day......I know, YUK but it works. Since I had such a good race on Sunday Scott moved my VDOT to a solid 48, no more 47-48. That meant that my 400's repeats were now 1:30 each and my tempo moved to 7:02! I had 8-10 400's scheduled for Tuesday just to be followed by a 2 hour run on Thursday in which 60 minutes was at AT. On Tuesday morning I woke up feeling like poop so after a serious mental debate.....should I run, should I rest, should I wait to see if I feel better later in the day? I opted for not working out at all and resting. First missed workout so far but it was for the best. I pushed the track workout to Wed. and after lots of sleep and tons of medicine I felt much better Wednesday morning. Off to the track to see what will happen. 8 400's at sub 1:30 in the bag! I was happy to pull off the new pace. Now that my right ear has unplugged I was no longer yelling, "huh" to everyone and I was medicine free on Wednesday. That night I still opted for my favorite night time relief, Nyquil so I could stay clear and get good sleep. I knew the tempo run would be challenging.

Waking up with an almost 100% clear head I gave myself permission to cut my tempo short if I felt crummy. I didn't want to ruin the progress I had made with this cold and I have a 30 miler on Saturday. The weather was just plain nasty when I showed up at 53rd this morning. Rain, wind and cold made it less inviting but I was here so I got out of the warm car to begin the workout. I felt reasonable as I blew my nose 10 times in less than a half mile but certainly not on top of my game. Time to pull of those hairy paces! The first mile was great, the second still under, the third pushing to line, the forth not gonna happen, the fifth.....I cried uncle! I just couldn't do it today. The engine was lacking oxygen. It was like the whole breathing system was slow on the intake.....the legs needed air faster than the ears, nose and throat could deliver. I jogged around while Tom and Trisha finished up their tempo's. Now the good thing is I think I might be able to beat this without my standard visit to the doctor but I am seriously knocking on wood right now!
Posted by Ronda at 12:13 PM