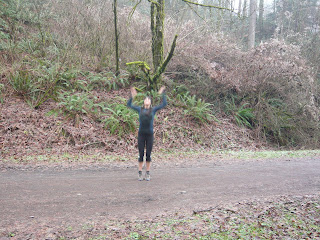 Me thrilled to have pulled off my tempo run today!
I woke up on Monday morning and when I went to wash my hair I had pain behind ear. Not only pain but a huge hard bump about the size of a robin egg (candy...not a real egg) and it's inside my head! It was pretty painful to the touch. I guess it must be swollen glad or some out of control lymph node. I had Monday off running but a hard upper body workout. I stuck out the lifting but it was lack luster either because I was taxed from Sunday's 32.5 miler or the giant thing that has nested inside my skull. I thought about jumping on the treadmill for 30 minutes to get my legs moving but life got in the way and it was probably a good thing since I wasn't feeling to peppy.
With Hagg Lake Trail Runs right around the corner it seems Stacey and I are always on the phone and taking care of details. I almost have all the permits filed and approved, shirts are in the making, awards are being printed. Stacey is busy with volunteers and supplies and we are doing at least 3 days of trail work. Stacey scouted the damage last weekend and we have 11 big trees down and most are impassable. We will be out there with 2 chainsaw crews removing those big boys before we do any reclaiming. Even though Hagg Lake puts our lives in chaos for about a month we love it. This year the race will fill which will make our day of race activities more smooth since no one can sign up on the spot. Life is busy right now! Basketball season is in full swing and Bill is super busy at work so it's hang on for the ride until the end of February. Adding serious training for a 100K sounded like a great idea back in the Fall but I think the training with all the other stuff has left me a bit run down. Bill and Alex took a look at my robin egg and Alex says, "oh my Mom that thing is huge, what is it"? Bill looked very concerned and try to order me to the doctor but I convinced him it would be better.

Tuesday was track day and this is a Peak week so it was 10X400 meters. My morning got sidelined since school was delayed so I had to squeeze in my track workout in between a couple of appointments. The temperatures have been cold for us Oregonians and I opted to do my workout on the treadmill so I went at it and despite the weekend runs and my bump I felt better than I did last week making all my paces. Wednesday came the crash! I had a scheduled weight workout then a recovery run. After an awful nights sleep because the pain in the side of my head had moved clear up to my eye and down my neck I awoke feeling puny. In typical type A Ronda style I ignored it and headed to gym for my workout which actually went well but when I thought about doing my run I had nothing. So, I dug deep and found some maturity and went home. Instead of running I cleaned up the office and worked on Hagg stuff. I picked up Alex after school and when we came home I feel asleep on the couch while he was doing his homework. I slept for 2 hours! I never take naps and when I woke up I still felt drained. That night I was in bed at 7:30 and was fast asleep for 10 hours. I guess I was trashed. Today I woke up to find my robin egg about half the size it was......progress.

Today was the tempo run with 60 minutes at threshold, ouch! I set my sig 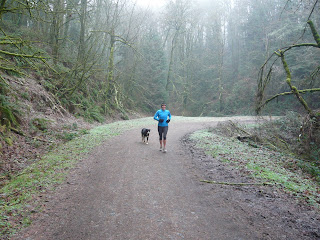 hts low and allowed myself to quit if I felt the quality was bad or I felt like my head was going to explode. Kris was coming out to join me but would be a few minutes late and Trisha was also out there somewhere. We all met on Lief as I was about half way through the AT portion and I was feeling really good, making all my paces and my heart rate was low. So.....no reason to cut it short! We finished up the tempo portion then headed back up Alder trail to the cars. I was thrilled to be able to do this workout since it was the toughest tempo so far and I wasn't exactly fresh.

I feel like I may have dodged a bullet but am not out of the battlefield yet. I still have my robin egg although it's much smaller but my energy level is good and I don't feel like a wet noodle anymore. I think I am riding the edge of training right now.....pushing but hopefully not going over the edge. One more big run followed by two smaller ones then the taper. I have my fingers crossed that my robin egg will not multiply or turn into something more than a bump in the road.
Posted by Ronda at 6:32 PM