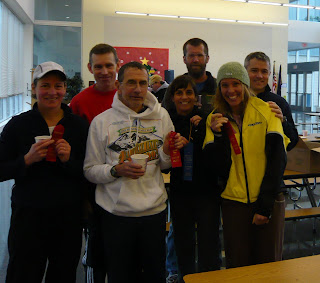 At least it used to be Forest Grove High School but now it's Tom McCall elementary. How do I know this????? I know this fact because Bill graduated from Forest Grove High along with his mom, dad and many other relatives. When Micheal came to pick me up this morning Bill gave us a history lesson on our race destination. Today was the 20.08K in 08....clever name huh. This race has been around so long I have ribbons with 9.7 in 97 on them and I am sure the Beast and Steve have some from the 80's. If your asking yourself how far is 20.08K it's 12.48 miles.

After a wonderful recovery week which included New Years Eve with friends, a trip to Deer Valley with just Bill and watching Alex's knock down drag out Basketball game I was physically and mentally prepared to give this road race a go. Not only was I ready to run but hanging out with Micheal, Tom, Kris, Trisha, Steve, Bob and Anna made it even more fun. Ultra runners were well represented and didn't let anyone down as they collected ribbons.
The morning started with a cold 37 degrees and after a fun warm up we all lined up ready to race. I got right up front. Off we went on the streets of Forest Grove, Or. Winding and weaving through the small town then down into wine country. The rain held off at the start but I knew where we were headed and there was snow in them there hills.....a bit a wind caught our jackets as we ran down the paved path which lead us to the country road and into falling snow. Miles ticked off at something like 7:10...7:15...7:20. Not paying too much attention to my heart rate and trying to find my groove as I followed Micheal's lead and pace. It wasn't long before the competitive road runners sized us up and set walls as they moved in front. Not having any of that I made my move and created my own wall....isn't that what you do in a race?? ;). I saw Micheal glance over as he watched this cat and mouse game and as we approached mile 3 and I wondered if this was way to early to be playing chase? I had a comfortable but determined pace set in at about 7:20 to 7:25 and was able to maintain this up and over the rolling course. I thought this was a flat race but from a road running perspective climbing 420 feet in 12.48 miles is not flat. I loved the hills because that gave me a bit of edge on the two woman that made me their target. Not knowing if I wanted to let them go by or maintain my lead bounced back and forth in my mind as much as we bounced

back and forth. I took the lead on the climbs and descents and they would catch me on the flat. At the turn which came at approximately mile 9 I was second woman. Shocked and determined to keep it I pushed as much as my legs would allow. Seeing all my friends very close on the turn was fun and they all looked strong and full of working smiles.....the slit kind of smile but not a full teeth smile.... My second place position was not going to come without a fight as I was still being shadowed by two very strong girls. Then out of no where comes a stealth chick....fast and relaxed she passed me like I was standing still. As much as I wanted to flex my competitive muscle I knew she was way out of my league. With only 2.4 miles to go, two good sized hills and a seizing rear end I fought hard to keep my now 3rd place position. My two competitors made their move and pushed hard on the flat before the hill. I tucked in behind them and told myself to just hold their pace and push on the hill where I know I am stronger. I did just that but they were relentless and kept step, breathing harder and harder we all crested at the same time. Another long flat section before the last big hill. Once again I was taken over forcing me into 5th! Now 5th is good but I was 2nd.....come on that is just not going to work. I fought hard pushing my heart rate near 180 as I tried to keep step with my girls. They were pulling away as we approached the last hill and less than .4 miles to finish. I gave it all I had on the last climb as I watched their fatigued stride pushing them. I powered up the hill but I knew I had to give it the all out 400 meter sprint to keep them off. I didn't look back and felt as if I was about to red line. Making the last turn to the finish I see Micheal jumping up and down waving his arm as if I was in the fight of my life. 1:32:?? finish time, 7:22 pace and 3rd girl. My girls were so close we almost caused a collision at the banner. Hand shakes and congrats came from all three of us to the other on a well run race. Making each other give it their best....an awesome way to finish a race.......camaraderie between strangers is cool!

The whole gang did some great running today and we laughed as we fed ourselves. 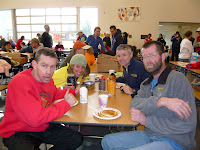 The race had a free pancake breakfast but Kris and I opted for training food. Micheal said I could dip my sweet potato in his maple syrup...it was FAT FREE! :). I thought about but just stuck to the plan. Now this is the way to end a recovery week. Next week is a Build which ends with a rockin 27-32 mile run at 8:25 pace........yowzaaaaaaaaa.
Posted by Ronda at 2:53 PM