Alex in training.....practicing crewing as he trys to help me get this pack on. It's fun times like this that help make a bad mood disappear! 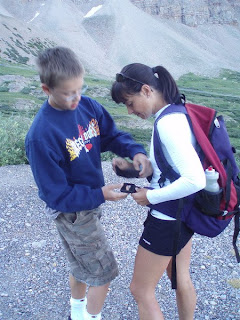 The sun is out if full force here in the Portland area. A rare sight in the deep depths of winter but even though its bright and shiny out the temperatures are freezing! We hit highs in the 30's during the day but with the East winds it really isn't getting over 25 and for us that's coooooooold.

Not only is the sun shining outside but I have been lifted from my approximately 2 week mental slump....maybe it really has something to do with the lack of low lying grey clouds but nonetheless I have been freed! Free from the nasty disposition I was having to a more sunny one, yeah! One good thing about a bad mood that lasts is when your over it you appreciate, value and grab onto a good one when it shows up. My mood started to come around on Monday when I got a ton of chores done including a bunch of Hagg Lake details. Since my list of "to do's" was shrinking I suddenly felt more restful. On Tuesday I had a track workout that went so well I almost felt like I was holding back. My sore spots on my body seemed to disappear rapidly after a good leg workout post track. Wednesday I went to see Dr. Tollenaar for an adjustment because I felt like my upper body was jammed into lower one and my neck seemed out of socket. He found a few spots that were not where they should be and he told me the bump on my neck was a lymph node. He also said it could take a bit before it goes all the way down. Dr. Tollenaar and a friend have now confirmed that my pea is an angry lymph node but if it doesn't go away before March I will go get it checked out.

What a way to start a week.....good things all around. With this being a recovery week my tempo run today was only 1.5 hours with 3 miles at T-Pace. During my last call with Scott he bumped my VDOT up to 47 from 45 based on my 20.08K run time. This meant that my tempo pace would be 7:17. If my T-Pace portion goes over 40 minutes I need to add 20 seconds per mile so 7:37 but today was only 3 miles so it was 7:17's. Funny but when I started up training again after the SLAM my T-Pace was 7:47 and those numbers were challenging. I believe I wrote posts about how much leg speed I lost over the summer and leg speed is not something I have a lot of to begin with! I went into WS100 07 with VDOT 51 and T-Pace 6:51 and was able to make those paces consistently. After the ultra season I was clear back to VDOT 45 or 7:47 T-Pace. A drastic loss when I felt like I was in such good shape. Within 3 months here I am at 7:17's and today I ran 6:58, 7:11 and 7:05 with room to spare. It's so cool to know that training works. It's also fun to feel your body bounce back from a big workload. The re-bound is noticeable and that's a good sign I am not pushing myself over the edge. It also means I am fueling my body well. This is different from other training times when I would have a hard time noticing much of a rebound after the completion of a cycle. My recovery weeks were nice but I never felt fully re-charged. My perspective has changed but doesn't it always change when you have new experiences? It's like the first time you run hill repeats on climbs you would have never considered running in the past but now they are all runnable, when rollers become flats, when steep is re-defined, when 400's and 600's are easy track workouts, when big thighs are muscular thighs.........all in the perception but with new experiences come new definitions.....life ya gotta love it!
Posted by Ronda at 11:10 AM