Micheal can be broke or at least wounded. :)
After a good quality 2.5 hour trail run yesterday with the gang just to tire out the legs for today's 30 mile pace run I was ready to get home, get to eating and get to bed. Before I could get myself in preparation mode I had the privilege of watching Alex's Basketball team take another win! This is big deal since last year this team only won 2 games the whole season. They have become so much better and a bit more aggressive and it helps. After the victory party at Wendy's where Alex and his buddy talked about their great shots and fancy moves over a frosty we were headed home and my preparations began.

My body was not feeling race ready but then again this is not a race but more like race practice. I am tight and the pep that I generally have going up the stairs was not as peppy. I decided it would be prudent to stretch for like an HOUR! I got out all my stretching toys, bands, foam roller, tennis balls for really digging out those knots and just in case I had a stubborn spot I used my yoga block to stabilize the ball as it digs into the glutes. All of this really helped get things loosened up but I knew I would feel some of these areas yelling at me during the run. After dinner we all went down to watch a movie and Alex helped me stretch some more and said, "Mom you have been doing this all day and I think it's time for you to stop". Who's the mature one in this house? Apparently it's not me! :)

Alarm was off at 5am and the whole family was bustling around. Bill and Alex were going skiing today so they were busy gathering all their gear. I had prepared all my bottles and food the night before so my morning was almost relaxing and gave me a moment to work some numbers. We all met at 6:30 to carpool out to the Banks-Vernonia Trail which is a nice rails to trails project about 20 miles out of Portland. The trail is 22 miles one way so we picked a 5 mile section we would run back and forth until we reached our goals. Steve, Susan, Stacey, Micheal and I all started in the dark for a 2.5 mile warm up. The weather was nice but cold. It was supposed to be a beautiful day with temperatures reaching 44 degrees, no rain and believe it or not....THE SUN! After the nice warm up we began the pace run, 5 miles one way, turn around and then repeat.

One thing became very apparent right of the bat. We were running uphill. Not anything steep but the grade was definitely up. As we continued on into unknown territory the uphill grade only got worse. It was a constant uphill pull with absolutely no downhill breaks which Steve confirmed by yelling, "it's all uphill to the end of the trail". Oh well, it wasn't bad and on the first 5 mile stretch Micheal and I were at exactly 8:30's. What goes up must go down so that was something to relish. Using nice leg turnover it seemed like before we knew it we had c 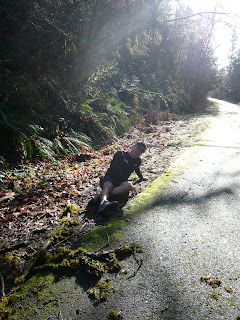 overed another 5 miles making up a ton of time. Due to all the recent storms there were bits of debris along the trail and Micheal could not resist showing off his fine tumbling moves by lobbing himself over a stick into a complete roll down into the drainage. I gasped as he went down but then couldn't help but laugh as he sprung up and continued running without missing a beat. 10 miles completed and now the fun begins. Since we are no longer ignorant to the terrain we knew we had to work it to make the split. At this point Susan is out on the trail running her own plan, Steve is still with Micheal and I who are being tailed closely by Stacey. She is running the Orange Curtain as well but got side lined by a broken toe for about 4 weeks. It's obvious she barely missed a beat during that time as she was only about .5 miles behind Micheal and I. "Time for music", that's what I said to Micheal. I was going to need to focus to make the pace on this grade which is exactly 591 feet per 5 miles and we had to repeat this 3 times! After about 2 miles on the second trip up Steve backed off and slowed to enjoy the scenery the wonderful day was providing. One of the great parts of this trail is the trellis section from the old railroa 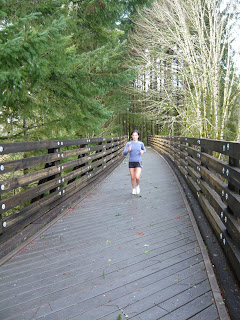 d. They have re-surfaced and rebuilt the whole trellis so you can run on it. This section comes about 1.5 miles after you have blasted down grade, turn around and start heading back uphill. My heart rate needed to be over 163 on the uphill 5 for me to make the splits so I worked on keeping it at least 163 but it was hard. This trail has awesome mile markers about every quarter and they are accurate according our splits which were very consistant. These quarter mile markers saved my bacon on the uphill stretch but were not necessary on the down but were a nice gauge. Before we knew it we reached the turn around, another 5 miles uphill and the pace portion of the run was half over! That was a comforting thought but not more comforting than the knowledge we only had to go up this one more time. Down we went again at what seemed like a blazing speed. The sun was now out and the air was warming up. The fog rising from the fields and the views of fog still lingering in the hills was a pleasant distraction. Letting my mind wander and ponder the surrounding versus the pain and tightness that has now gripped my back side was refreshing. All the gazing cost me about 2 minutes on my downhill portion but we arrived at just under an 8 minute pace. When we got the the turn for our last 10 miles of pace running and our last trip up behind blaster hill Micheal comments, "This is gonna be a killer". At this point my back side was so tight that all I could do was focus on my form. Trying so hard to keep my stride just a bit shorter and my turnover quick to ease the push off which was really not fluid. Micheal reminded me to drop my shoulders and calm my breathing and I knew I needed to push my heart rate to at least 160. I glanced at my watch periodically and it seemed to be stuck at 159! Knowing the watch wasn't stuck but rather my back side was stuck I knew we would not be under 8:30 pace for this trip. Arriving at the turn slower than the other two was not surprising and is to be expected but I was determined to make it up on this last and final 5 mile stretch. Micheal even used a swear word before we headed off and that is amazing since I can probably count on 2 hands the number of swear words I have heard from the General......that is why I titled this, "It can be done....the general can be wounded". I love Micheal but the guy is NEVER sore, beat up, fatigued or running in pain but today he was in at least a tiny bit of pain. :) Feeling like the horse who knows the barn is just around the corner I watched the quarter miles clip off...2 min., 1 min. 58 seconds, 1 min. 48 seconds.....I was sure this would be our fastest time down. Sure enough we arrived in under 38 minutes and it was done! 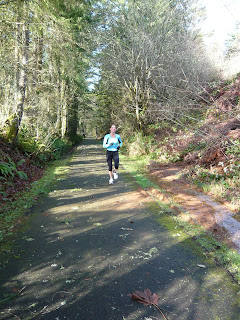 We celebrated, high fived and began to walk back to the car and we could see Stacey coming in for her home stretch. She looked strong and excited to have reached the final quarter mile and sprinted to the finish. We all felt worked but the pain was no match for the excitement of achieving the goal and far better. 32.5 miles, 1841 feet of climbing in 4:27:05 or and 8:13 pace. The 30 mile pace portion was done at an 8:08! We walked the entire 1.75 miles back to the car laughing and talking about all our inner voices, inner battles and inner bargains we made along the way to get us through. We talked about the need for an ice

bath and how the run off water in the ditch seemed inviting. The entire run seemed to fly but it always does when you are having the time of your life, doing what you love and sharing it with others.
Posted by Ronda at 3:36 PM