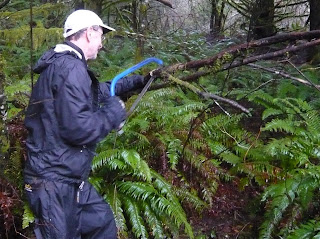 Wow! It's been along time since I've had anything good to report. It seems like a month since I have felt even remotly strong. I know it's really only been a couple of weeks but when you do NOTHING time stands still. Normally I am begging for life to slow down but after 4 days on the couch I am begging for 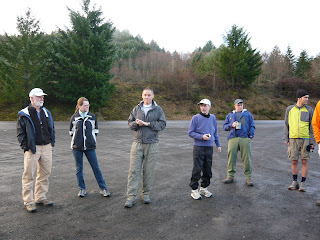 a new day instead. Yesterday was a full day of trail work with 19 other bush whackers, blackberry clippers, ditch diggers and debri rakers. Since a small group went out last weekend and removed all the fallen trees with major power tools all we needed to do was cover 14 miles of trail and remove anything left on the trail making it a nice smooth path for race day. Manual labor is always so much harder than you originally think it will be. A fairly fired up group of fit strong people were pretty much beat by 2 p.m. We created 3 groups with team leads and split the trail into three sections. I must of have gotten off easy because my group had covered their 4 miles in about 3.5-4 hours leaving us some time to double back on the other teams who were being engulfed by overhead tree limbs and blackberry bushes. Due to all the snow the tress and bushes couldn't recover enough to lift themselves back up leaving their branches and stickers draping over the trail. All of that had to be cut back and removed which was very time consuming.

Throughout the day I could feel my energy coming back and at 11:30 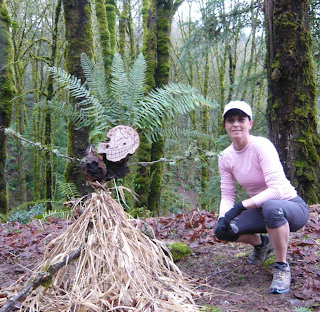 I was starving willing to consume anything! That was a sure sign things were turning in the right direction. By the afternoon I was itching to eat and couldn't wait for my 1.5 hour run this morning. This morning I met Tom in Forest Park and we headed out for a good Z3A run. While roaming around we found a new friend. Someone had created this creature and left it along the side of the Lief, very cute, creative and a lot of time went into her construction. The face is carved from the fungus that grows on our fir trees here in the PNW. I am sure you have seen it before, it looks like a mushroom growing out the side of a tree and the top is white leaving a nice surface for carving. They are called conks and Beast took a picture of me years ago pretending to eat one. I have seen this artwork in shops around town. The white surface creates a brown line when you push on it. People have used it to create drawings. This photo does not due the artist justice but it was a nice treat to find in the woods. I felt 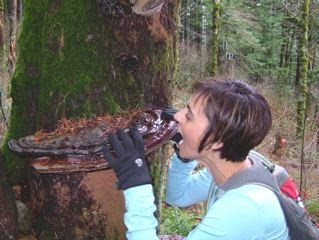 good on the run, still not on fire but there is a flame beginning to emerge. Just in time I hope! My body is still a bit stiff.....funny because I have been resting so much you would think I would be loose...not stiff. I thinks that's a component of age......need to keep things moving or they will be stiff. :) I am hoping that every run from now until OC100K will be better than the previous....meaning I will just continue to bounce back day by day. Our buddy Andy K. will be at the event for a portion of the day because he lives in the area. He has offered to help out in any way he can while we race and that was a great surprise. It will be a huge help having a friendly face around and any assistance he can lend is going to be much appreciated.
With OC100K so close it leaves me pondering the rest of the year. Time to get the trails legs turning. Hill repeats and longer climbs will be on the docket. I am anxious to see how the road speed translates. Now we need the lower areas in the Gorge to begin their spring thaw! Daydreaming about familiar routes and creating new ones will leave the gang talking and planning like crazy. Since most of us are running Bighorn 100M it should be a very fun and challenging spring.

P.S. - I haven't been able to get my spell check to work lately.....anyone else having this problem on blogger? Since I am a math person my english and spelling skills are horrible so I need that spell check badly. :)
Posted by Ronda at 11:32 AM