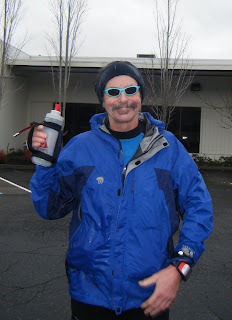 Whew, over half way to our goal and everyone is standing or leaning. Yesterday was a 15 mile day and we did the bridge loop in downtown Portland. I have never done this full loop but have been on various stretches of it. It was cool to link it all together. The snow/ice situation was much better when the above 40 degree rains started and continued. A serious melt began. During our 15 mile run we had constant rain with temperatures in the low 40's. The winds on certain stretches were amazing and made it really hard to move but we were all thankful for the opportunity to come together and run. 13 campers showed up for the group run and 1 slipper camper, Scott Diamond. Don't ask what slipper camp is because it involves wearing slippers and eating donuts I am told. As we made our way we ran through quite a bit of icy slush making the footing rather tedious. Staying upright was a must and that took top priority over speed. When we crossed the Sellwood bridge making our way back home through Willamette park we were treated to Arctic water. If we were polar bears we would have been in heaven! This is the low point next to the river and as the snow began it's melt it uncovered the layer of ice. The standing water with floating ice bergs was something. Once you were in Willamette park there was simply no way to avoid it. It was sooooooo cold as your foot sunk about 6 inches and your ankles moved the ice bergs. Being the "look on bright side kind of folks" Steve pipes up, "This is great training for Hardrock and all the river crossings". Well then, by all means lets just start swimming! We had a great time and everyone seem to like the run. Too much fun.

loops. We did 2 full loops with full intentions of avoiding the Arctic zone in Willamette park. But, all during Saturday night the temperatures moved to the high 40"s and even into the 50's with a series of warm rain and wind most of the snow was gone. It was quite impressive how fast the snow around my house just simply disappeared overnight. When I woke up the first thing I did was check on the weather and it showed 54 degrees in downtown Portland! Are you kidding??? Shorts it is. Of course being nervous I drug along tights, gloves, 2 long sleeves, new socks and another pair of shoes. When I arrived Steve and I were the only ones in shorts. Everyone was bundled up like crazy. I looked around and wondered if I made the right choice or Dave's email report of his dream run in the tropics transported me into la la land. Again we had quite a group of pavement pounders. Since not many of us train regularly on pavement this 21+ mile run on solid pavement would prove to be interesting and possibly painful but hey, we can handle it. I plan to keep the run interesting by adding some strides and then some mile tempos on the backside on the Springwater Corridor. No way was I heading into Willamette Park for and ice bath so I was going to the a horseshoe course. No one else was going to wimp out with me. They are were doing 2 loops, arctic zone and all. As we made our way around it blew our minds on first how hot it was and second how almost zero snow existed. Since that was 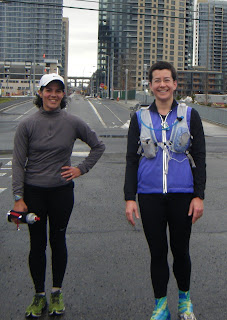 case I continued on with the group and when we arrived at Willamette Park there was zero standing water and no snow. WHAT???? Was yesterday all a dream??? Really??? We booked it on both loops doing the second one faster than the first, nice! But....my legs were feeling the love for sure. Nothing was unbearable but the general marathon time legs. The kind that don't really want to move very fast no matter how hard you try.
Another 2 days of camp has come and gone. What fun it's been so far. I have really enjoyed the camaraderie this year, thanks everyone. Only 3 days left with the biggy on the 31st. After hearing a pretty good trail report I will most likely propose a couple of options for the 31 miler. The trails are still quite buried in snow and there is NO parking at trail heads yet. In some spots the trail is not even noticeable unless you know what you're looking for.
Posted by Ronda at 5:57 PM