Last weekend was my 9th running of the Mac.  One of my favorite 50K events!  The only time I have missed the race is when I was running Miwok 100K.  This year I felt really good about my training and wanted to push the pace and see how fit I am as I head into the taper for SD100M.  Unfortunately Bill brought home some horrible crud.  Though I gave it my best attempt, even trying some Jedi mind tricks to ward off the bug it got me good.  I had antibiotics for the horrible sinus infection that took over my face but instead of admitting to myself I was sick I chose to ignore it. Secretly hoping I could out run it or better yet run it out of me. My immune system had none of it. On a NyQuil induced sleep the night before and a 4:45 wake up I felt really horrible on the drive to Corvallis.  However, the more time I spent upright the better things seemed. I was really looking forward to running and just forgetting about my head.

The weather has been great!  PNW sun...there's just nothing better I promise. Saturday was gorgeous!  After catching up with friends and getting settled I soon forgot that I felt like crap. The race started with it's general quick pace and I did my best to settle in. Soon a slight compromise in my breathing appeared but I kept a descent pace. At the top of the first climb I pulled over to re-tie my shoes. They felt loose and sloppy. I chose to wear some old Cascadia's which I planned to toss after Mac. They had really nothing left in them. There's only one reason I can come up with for making this decision.  I had a brand new pair sitting in a box and was saving them for SD100M.  Not sure that's a sound reason but that's what I'm going with. Soon after tightening the shoes I pulled over to loosen them again.  Carrie kept catching up and said, "what's the deal with your shoes".  I told her I have turned into Goldie Locks! My shoes are too tight, too loose, too stiff and just not right.  Laughing it off I moved on with loosened shoes.

As we began winding through MacDonald Forest in and out of trail  my head was just clogged. That's the best word I can use to describe it. My ears were plugged, my nose was plugged and all I had was my gaping mouth to move air. With that soon came the chills followed by body aches. I am officially sick!  My body is pissed at me and I am pissed at it! I decided to take some Tylenol hoping to gain some control. My equilibrium was just "off". Every time we wove back into the woods I had a hard time maneuvering and BAMM, I sprain my ankle.  It brought me to one knee and the guy behind my said, "I heard that, are you okay".  I said yes, and sat there adjusting my very loose shoes and checking out my foot. I got up, walked it off but knew it was more than a minor sprain.  I made my way out of that trail section and back onto the gravel road.  I did more assessing.  How much does this hurt, should I quit, can I run and so on?  I felt like I could run but wasn't sure how it would be in any kind of unstable ground.  The good news is this took my mind off being sick.  This happened somewhere between mile 11-13.  I spent the next 9 miles deciding if I should quit.  By now my head felt better and all the body aches were gone.  Now I was just stuck with current pending issue, my foot.  When I got to Dimple Hill at mile 17 I just coninued on to the next station. That's how it goes....run to the next aid station until you run out of aid stations.  My ankle seemed to hold up okay but my downhill running was rather pathetic. When I left mile 22 aid station and began the climb out my ankle did not like the dorsey flexing required to climb.

Coming into my final chance to call it a day the thought didn't even cross my mind. Nice work..... keep thinking you're going to quit, run to the next aid station until it's the last and then why would you quit?  So I finish my 9th Mac.  Not anywhere near what I wanted to do and now I have a torn Anterior Tali fibular Ligament. This is the one closest to the top of the ankle which is why I kept feeling like my foot hurt. This will heal and rather quickly I hope. I am pretty thankful it's not worse. I am a freak though. Carrying a cooler of ice in my car, compressing it and today began to work on stabilizing. I tested it out on the bike and the doc say's I am good to go on the MTB. Though I was hoping to have one final bad ass weekend in the Gorge before the taper for SD100M that might not happen. I have a MTB race on Memorial Day weekend and that's it.  If I can heal super quick I might get a weekday session out there but not going to take any risks. I CAN'T sprain it again or I'm done. As for the sinus infection, well, by Monday I was so sick it was horrible. I feel a ton better today. 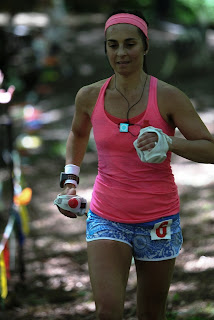 I wish I could say I made a good decision but I should have stayed home. On the other hand I love the Mac and didn't want to miss out on any fun. Plus, it was my 9th! I also wish I could say I I turned a negative to a positive. Not so much! The only thing I can say is I finished and didn't quit. There is something in that that seems to satisfy my stubborn nature.The only thing around me showing any bright side that day was my outfit! See how the justification works? So moving on to a short MTB race then SD100M. :)
Posted by Ronda at 5:14 PM 11 comments: