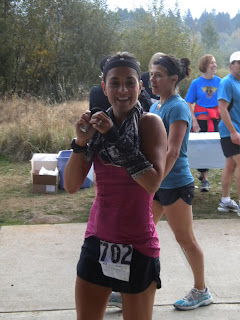 The saying is true. 5 weeks of zero running made me crave it like crazy. I really lost my "movo" (motivation) just before Cascade Crest 100M. I was in serious need of some R & R. After my pacing duty at Wasatch I hung up my running shoes and took that well needed break. Last year I did the same thing but wasn't ready to give up my need for physical change and reward. This year I was on the fence. The same figure competition I did last year was available but I wasn't sure I was in to it. With the prod of some friends and a bit of curiosity I decided to sign up. I chose not to document the process here because I did in detail last year and most everything was the same. I knew the drill and last year saw some amazing changes. I was able to keep off most of the fat loss from last year so I was starting off in a better position but was my heart in it? That would be the question and it was a 3 week battle of wills before I found the answer.
I got the menu plan, I got the workout plan, I had been here before but this time I had less blub to shed. Of course I decided I needed to raise the bar and this year I wanted to arrive before the water drop at single digit body fat numbers. As the process unfolded and it became clear I needed to make a change from last year to get a change this year. Micheal (who's name is spelled as I have it) always says, "Nothing changes if nothing changes". Simple words but absolutely true. With 12 days to go before bikini time I was faced with a decision. Either step up to a new level or remain the same. I wasn't happy, I wasn't motivated and I was definitely not going see single digits before competition day if I didn't do something different. It took me about 2 days to decide if I was going to stay status quo or make a change. After a few hours of pity party stuff, pouting and simply being disappointed that my body would not shed more faster I decided to give it all I had for the remaining 12 days. There were only two things I could different, change my diet, change my exercise. At this point I was doing 1.5 hours of low level cardio (were talking heart rate below 130) with lots of lifting and I was eating exactly what was outlined. The fix? 3+ hours of looooow level cardio (heart rate below 116) and the last 4 days before the show I ate only boiled cod for protein and oats, brown rice or rice cakes for carbs. The cardio stuff was hard because it was boring, really easy and it was broken up throughout the day. I felt like I never showered. I embraced it for 12 straight days. The diet was hard the last 4 days. Generally I have no issues with the menu. I am not hungry and generally only have a few moments of scavenger behavior I need to control. 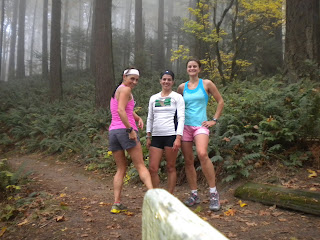 But.....boiled cod for 42 straight meals could make anyone puke. I actually had moments of gagging and a couple of times teared up wondering why I was doing this. In the end it was all worth it. 9.89% was a sweet number to see. By the time I dropped my water I saw 104 on scale so I was tiny! I had great muscle definition and got 2nd out of 12 in the 5'3" and under group, 4th in master and 2nd in the short bikini division (I entered last minute the day of the show). Seemed I found my motivation in the last 12 days finding some sick pleasure in the process. It was rewarding because it was hard and I had to make a choice to make a change.
(I am pretty excited to see mud on my leg)
The day after the show we drove home and I planned my first run on the trails! I was at the trailhead early and enjoyed a lovely 7 mile run which seemed effortless. I got back to my car in record time and felt hungry for training to resume. I ran the next day and the next day. By Thursday I was so sore I could barely bend my legs. Apparently I haven't forgotten how to over due things. My quads were hammered but I loved it! I signed up for the Catalyst Challenge 10K that Saturday. So, I have run 3 runs, gotten myself incredibly sore and now I am going to get a VDOT at a 10K so I start my training. 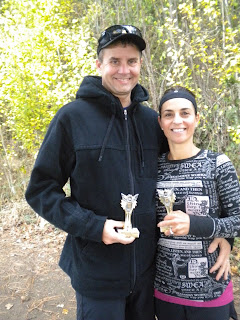 The race went so well I shocked myself. I felt strong and in control though my lungs had a max uptake it was enough to do 45:30 or 7:20 pace. I got second and was thrilled to have had such a good race given the lack of running. I think the lighter weight comes into play here. Bill ran the 5K and he had a great time winning an age group trophy. The next week I had my first call with Scott and got a schedule for the next 4 weeks. I signed up for Surf City Marathon in Feb. and I want to go after a PR. Training has started and it's quality stuff right out of the shoot. I have already done 1 M-Pace run, 1 Tempo run, a strides workout and one long run. Ahhhhh, it feels really good and I am pumped. However, Alex (aka-germbot) shared his cold with me. I sure hope it passes quickly because I am motivated!
Posted by Ronda at 4:59 PM 5 comments: