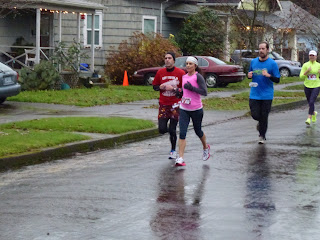 Generally winters are long for me.  The gray sky's take their toll on my mood. This winter has been less gray, less wet and I have felt reborn.  It was a long late summer for me.  I raced poorly and spent the good part of late July through December very sick.  Off and on illnesses that were explained away as the flu.  I was wondering how many times can one person get the flu! After lots of tests, a couple of trips to the hospital, a lot of blood draws and much resistance on my part I finally got an answer.  Rocky Mountain Spotted Fever from some random tick bite I never knew I had.  It was one of the most frightening and frustrating periods of time. Not knowing what is wrong and professionals validating there's a seriously problem but not having an answer is not good for a control freak. Also, I have devoted my much of my free time to living and creating a healthy lifestyle. To be told that might not be happening gave me anxiety. Thanks to my persistent, relentless, curious doctor I finally got an answer and treatment. The CDC still wants to believe I had something else but each time they take more blood, send it back to Colorado, test it differently it kept coming back with the same bug.  So, I am just going to say RMSF is in Oregon folks! It's a terrible hard to detect bug so wear your 100% Deet and check yourself for bites.

All the while I still worked on running.  I fought hard to do workouts. I made some minimal progress from October (when I hired a coach) to December. I ran an all out 10K in Early October to get a baseline.  My goal was to get my running speed back. I was able to squeak out an 8 min pace for a flat 10K.  I fought hard through good days and bad days not knowing I was carrying this lovely bug around. On Thanksgiving I set out run as hard as I could at the local 10K Turkey Trot to see how much I progressed just to be slapped in the face. Just 3 days out the hospital I should have known better but I guess I was just hopeful.

In early December I ran the Holiday Half Marathon which was slated as another time trial for me. I was still not completely well but was better. I had high hopes and though I was severely hampered with breathing issues I was able to do 8:15 pace. Not at all what I had hoped for but at this point in my life I was just happy to be running.  Honestly I had began to decide I might have some weird auto immune disease and I needed to come to grips with the how my new life was going to be. Alex came to me one night with tears and flat out asked me if I had Cancer or something horrible and was I going to die. Thank God that all ended by mid December! I was diagnosed and was done with the simple Antibiotics. I was a whole new person by mid December! I didn't realize how sick and crappy I really felt until I felt better. Months and months of measuring my weeks by announcing to Bill I had a good day was over! Each day would start off with a hope I'd feel better and on occasion, usually after a day of being so sick I slept most of it away after an hour run, I would be thrown a bone. It was over and I was back to my old self I hardly knew.  If it wasn't for Chris and Carrie (BRF's) to drag me along and motivating me through their runs I might have thrown in the towel.  This is why we need running partners :)

With a clean bill of health and whole new outlook I was able to think about races and fun things I wanted to do.  My first goal was running speed. With my Coach committed to forgetting I'm an ultra runner and train me solely for speed I was on my way.  Now the workouts were paying dividends!  My track times were coming down and progress was being made.  There is nothing more motivating than making progress.  Measurable, quantifiable results are what we all need.  I ran the 20.13K in forest grove at an 8 min pace then ran the Vancouver Lake Half Marathon in a 7:41 pace.  I was so excited!  It's not anywhere near my PR just 4 years ago but it was serious progress as of late. 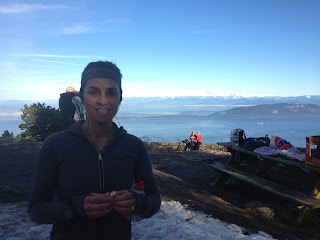 Last weekend I ventured up to Orcas Island 50K.  Not at all in shape for this very hard 50K I second guessed myself all the way up the final 10 miles of the race.  My coach didn't really have much to say about whether or not I should do this.  He felt I had the endurance in my body somewhere and more than enough experience to understand it.  He left it up to me.  My longest run since September was 17 miles of which only 9 was on trail.  Everything I've been doing has been on the road. I have been in the weight room working on solid honest to god Deadlifting with Chris and Jeron at Savage Strength.  This has been awesome for my running form, glute strength and hip mobility.  All the things I have been (and most runners) struggling with for a while. It's really key to keeping me injury free. During Orcas I was surprised at how all that I have been doing played well into this event. I started out in the back where I belonged and took it easy for the first 15.  Since I thought the wheels were going to fall off at about 20 miles I wanted to be smart and realistic.  I ended up running negative splits and actually felt amazing at mile 20 and decided I would throw caution to the wind. I ran the first 14.6 in 3:46 and finished in 7:16, can't complain! I had never been to Orcas Island before and since this was a Rainshadow event I couldn't pass up the chance to see it.  Beautiful!  I was in a state of pure bliss all day.We got a bluebird day taboot! My quads were pretty sore on Sunday.  Can't remember the last time a 50K did this to me but it was a great injection of wilderness.
Posted by Ronda at 3:38 PM