Not since I was coached by Scott Jurek have I seen the kind of progress I am experiencing now. October I hired Sean Coster (on the recommendation of my friend Kristin) who owns Complete Running. He didn't actually just LET me pay for services.  There was an initial meeting where we discussed why I wanted to hire him.  I knew Sean from back in the day when Stacey and were Hagg Lake 50K RD's. No introductions were necessary but I sensed he wanted to make sure we were a match with regards to goals and philosophies. I was craving the running ability I knew I was capable of.  Something I gladly gave up to become a Leadman. My focus from diligent run training to master the mountain bike enough to achieve my goal took precedence. I wouldn't change that for the anything! Becoming a Leadman was on my list of "Holy Crap Can I Do That" list since I watched the mountain bike race with Beast while prepping for The Grand Slam.

Though my main goal was to regain my confidence and running ability I had another goal.  I needed to shake the attitude or clean out the mental junk drawer. The drawer had accumulated a lot of trash. Stuff I had been telling myself and negative ideas I created. Some of the biggies: I am getting old, I was never fast anyway, everything is going to hurt and a few others I can't remember.  Basically a drawer full of crap! It was time to make an adjustment. Not only did I need a good training plan I needed a good mental coach. I know full well that in order for me to change the way I think I need to do things. I can't just buy into the "I'm Great" idea without action. There's a quote posted on a billboard I drive by daily that says, "A goal without a plan is just a wish". I am not able to sit down, write a bunch of positive things down, read it and believe it.  I need to experience it through results and find a journey that forever cements a new outlook. I can however, clean out the drawer. I can dump the crap in the garbage and decide to be nicer to myself.

During our meeting I wanted to be clear I wasn't looking to be a better ultra runner.  I was looking to be a better runner. After an initial time trial at the Nike Campus it became clear to Sean what I needed to work on.  My mind was open.  I left all preconceived ideas of who I was as a runner and what I've accomplished behind. I was a clean slate ready to gobble up all the advice and direction he could dish out.  That is the best place to be when hiring a coach or mentor.  Otherwise it's wasted money and time. After watching me run, attempt drills, sprint and move it was clear I had potential but there was work to be done. My body was off, my stride was funky, my arms didn't move and my high end cardio was absent. There were drills and bounding I couldn't even do, tests I simply failed and though frustrating I was more determined. I found loads of humor in just how stuck I had become. I was really excited to make changes......on so many levels.

The plan:  I am sucker for detail.  The more detail the better. The schedule was incredibly well thought out.  Though nothing I've done before I was excited to give something new a try. The general phase training I was used to wasn't there, the pacing stuff wasn't there and no general periodizaiton training I could identify. In addition to the running there is strength training and drills. The goal is to improve my form, get me off my feet using drills (not shown in the schedule), fire up my fast twitch neuromuscular system and stamina. At this point my endurance was not part of the picture.
A typical week would like this.

Though the description would say recovery, tempo, etc and he had paces based my time trial those were secondary to the FEEL.  This was a big road block I had to over come.  I had to learn how things FELT rather than solely relying on my Garmin. I spent years using The Daniels Method for my key workouts where pace is a key, I did years of Heart Rate Training where HR was key so this FEEL thing was not easy for me. He supplied me a detailed guide defining the FEEL of each of these. I studied it trying to visualize and think about how my body would FEEL during the effort. In October when I started with Sean I used the paces as my key guide but worked very hard to adopt the ability to FEEL it, to be in my body mentally.  I noticed right off, at that time, I didn't have much association with anything past easy and hard. Nothing in between had any kind FEEL association in my brain. I knew it was first because I have never looked at my training from this angle and second because my fitness would need to evolve. When I say evolve I mean my gears, different speeds or whatever you want to call it needed to be developed. In order for the speeds to have a FEEL I needed to be able to do them with more emotion than just plain hard! 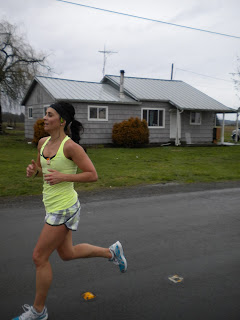 Now into this for 20 weeks where I have not missed one workout I can report the changes are quite dramatic. Not only did my 1/2 marathon time come down from 8:20ish pace when I started to a 7:41 pace in January but my low end has made some huge improvements.  When I started I would run my 9 mile conversational run at 9:45ish at 142 beats avg.  Today I'm running my 9 mile (same route) conversational at 9:01 and 138 beats avg.  Pretty freakin awesome!! My track times for 400M (8-12 intervals) were at 1:49 and now at 1:38.  The proof is in the numbers. There are many other interesting adjustments or side effects this training has helped create.  I'll go into that next time.
Posted by Ronda at 10:51 AM