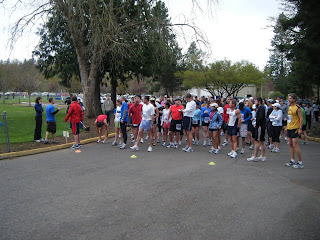 Today was baseball and racing all in the same park. What are the odds of that? Darin and Trisha's first event took place this morning. The Reason to Run 10K, 5K and kids runs was held at Cook Park which happened to be the same park Alex was going to play his game. I did the 10K which started at 8:30 and Alex played his game starting at 9:00. It was fun to run right by him while he was out there fielding.

Cook park has some nice bike paths with some trails woven throughout. The rain held off and it was perfect running weather. This 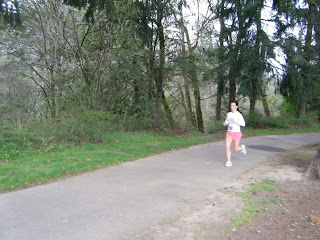 was an all out effort from the start. My time was 44:16 or 7:08 pace and I got first place. I was in third place for about 2.5 miles but those rolling trail sections played to my strengths and I moved into first place right around the 3 mile mark. Bill would pop out and snap a picture here and there while he watched Alex's game. By the time I hit mile 4 I had a good gap going and the bike path gets very rolly in the last two miles. I knew I could hold the lead but the gal behind me was not giving up without a fight. I was really strong and felt the extra gear when I needed it. This was the most in control 10K effort I've ever run. It was fun to win! I collected a cool plaque for my efforts. Tomorrow it's off for a late Easter run in the gorge. I sure hope that bunny has all those eggs hidden. :) Who will get the golden egg???????
Darin and Trisha did a great job on the event. The shirts are probably the best logo I have seen on a race shirt and the prizes were amazing ranging from shoes, socks, $100 gift cards and jewelry. Nice work Reason to Run.
Posted by Ronda at 2:08 PM