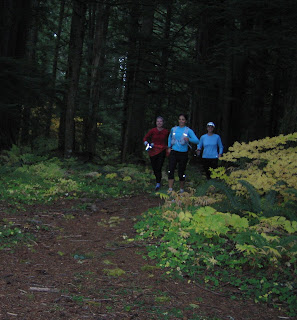 Monday in the gorge has been a great way to bounce into Fall. It's also just plain fun to run on Monday's with the girls and get all caught up on the priors weeks happenings not to mention one killer workout to start the week. Yesterday Susan, Trisha and I did a 2.5 hour loop and climbed 2,700 feet....we worked hard! Again we were treated to a day with a rain free start and just a drizzle near the end. The colors are changing fast and becoming more beautiful each week as we peer off in the far distance only to see snow on the high mountains.
Our 4 day vacation in Disneyland was great but I came home really sick with some nasty cold. I felt it on my run yesterday but pushed hard anyway which leaves me suffering even more today. I have a bad habit of not being very good to myself when I am sick, I just pretend I'm not, continue on with my normal plans then find myself walloped! You would think by now I would have learned a lesson but instead I have decided to just accept this bad habit :). Alex had so much fun at Disneyland and one of the best moments came when we entered the park and as we were walking up main street he says, "mom, can't you just feel the magic?". Of course I said yes and he went on about how wonderful he felt, it made me giggle and remember how great is was to be a kid. Speaking of kids......Bill is just one big kid, he loves Disney just as much as Alex and they ran me into the ground. We were there when the parks opened and we hustled around all day till almost closing. That meant 14 hours of lots and lots of people and stimulation. I came home and woke up in the middle of the night thinking I was being attacked by some fuzzy Disney creature to find it was my cat.
This week I find out about my 2008 training plans when I have my call with Coach Scott. I am so excited to see what's in store for next year. If I don't get into WS I will most likely go to Bighorn 100M with some friends. I have wanted to do Bighorn but WS100M was more of a priority but now it's looking like I will get my chance to check out this course with the WS100M lottery being so tight. I have worked with Scott for 3 years now and every year he comes up with new and exciting workouts that he has researched and practices himself. I have never been bored! It seems like forever since I have regimented training and I am craving it, I guess that's the whole purpose of a break.

A couple of other things that have kept me busy are weight training and Hagg Lake Trail Runs. I have been in the gym 4-5 times a week working out hard. I was reluctant to share this but decided if I did I would be more disciplined so here it goes...... I had my body fat measured with a comprehensive caliper system which pinches far to many spots on your body :). I feel the results were pretty accurate because I have had it measured a ton using various methods. I am fatter than I would like to be :). The system measured me at a high of 17% and a low of 16%. I would really like to have it say......high of 14% and low of 13%. I know that 17% is great for my age and I don't feel like I need to lose any weight however I would really like to get down to 14% and see what that is like for racing....more muscle mass is the key to seeing 14% so lots of time in the gym. I put myself on a fat reduction diet which still has me eating quite a lot of calories but the focus is composition of the meals and timing. I get to eat 1965 calories a day max. and I eat a 20%,65%,15% protein, carbs,and fats ratio. I have to eat every 2 hours so about 6 meals a day. Now I won't be able to do this when I get back into serious training around January because the calories are just too low to maintain strength and stamina during training. So.......I am going to do this for the next 1.5 months or 6 weeks and see how it goes. A few key elements to making this work are measuring all my food using a food scale (Stacey bought me one last year for my birthday) and logging all my food. Wow....measuring my food is an amazing eye opener. Let's just say it's a good thing I run because I clearly have no idea about portions! Logging my food is no big deal because once I started it was easy because I generally eat the same things. So far I have gotten lots of ahh haaaas. First, I don't eat often and I don't snack therefore eating every 2 hours is not easy for me. I prepare most of my meals so the preparation part is easy but making sure I have all the food I need with me during my day is hard. I used to eat a lot of protein, around 30% which is not a good ratio for an endurance athlete because you train your body to burn protein instead of carbs which takes a lot more energy. I found I don't eat enough during the day and generally would eat way to much at dinner with the family. I have had to "back away from the fork" as Micheal would say during dinner. Over the next 6 weeks I am sure I will uncover other tid bits to share but for now that's all I have. The question is.......can I be this disciplined?????? I think so :).
As for Hagg Lake Trail Runs (25K and 50K) Stacey and I have scheduled the event for 2/23/08. Our date was approved today and we are getting applications ready for distribution. Last year we had a record number of participants and exceeded our 350 limit. This year we will not allow the race to go over the 350 mark. We are looking forward to another great year for the kick off event for the Oregon Trail Series!

Congratulations to my trainer and good friends Marlin (green underwear) and Jamie (orange suit) who won first place in their divisions for bodybuilding and figure. They both have worked super hard and transformed their bodies. Not ultra runners but definately crazy and inspiring!
Next up Blue Lake 15K on Saturday, hopefully I will be feeling better but I going no matter what.
Posted by Ronda at 10:10 AM