(the orange area is the Gluteus Medius) 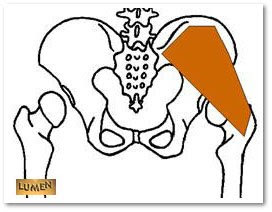 I have been so fortunate to not be saddled with injuries but I have been dealing with a pain in the butt! Since April I have had a nagging pain in the the lower area of my rear end on the outer side near the insertion of the lateral hamstring. It has been nothing more than an annoying ache that creeps up after a good leg workout at the gym or any kind of speedwork from tempo runs to track workouts. To deal with this I have stretched and iced but chose to ignore it for the SLAM because I felt I didn't have time to make it a priority and I could run through it. Now that I am on a break from any specific running schedule I thought I would get to the bottom of it and do what I needed now to correct it since resting nor icing seemed to cure it.


I wouldn't call this an injury because it didn't keep me from performing in the sport I love. However, with speed work and leg workouts coming in the near future I knew it would become an injury very quickly. This pain in the butt turned out to be caused by an extremely weak Gluteus Medius muscle on my left side. I am the queen of compensation which most ultra runners are due to the prolonged time it takes to complete an event but there is healthy compensation and non-healthy compensation. To get around the pain I would swing my left leg around vs. propel it forward. I knew I was doing this because on the forward landing of a stride I would have a slightly pigeoned toed landing meaning I was rotating my hip to the outward position. Also, when doing any one legged squats or performing lunges my hip would noticeably rotate out, in other words.....collapse. When I did these exercises or speedwork which requires an elongated stride I would end up with pain.


At my gym they have a physical therapy office so I went in to ask for an evaluation to determine the source of pain. They have a free sports night where a doctor comes and along with the physical therapist do an evaluation. Within about 5 minutes of muscle testing it was so obvious my left glute medius was non-functioning forcing all the small rotators, abductor magnus and lateral quads to do all the work to stabilize my hip. The pain in the butt was a very worked periformis and deep rotator. I am so lucky I haven't torn the deep rotators but I think I was saved by the SLAM because I wasn't in full blown training like I was during the Spring. If I had continued with the hard leg workouts, track and tempo on top of back to backs with hill repeats I most likely would have been "injured"....hurting so bad I couldn't do the sport I love.

They tested the muscle by laying me on my side, have me flex the medius then they applied pressure with their hands and forced me to resist against that pressure. On the right side.....bring it on.....all day that sucker is solid. On my left side I couldn't even hold the contraction more or less any resistance.

So........for the last week I have been assigned exercises daily. I call them my "Jane Fonda's". You know the old exercise videos complete with high cut one piece outfits accessorized with leg warmers. Jane would lay on her side and lift her leg up over and over again. Now this is not that simple, you have to be in the exact right position and since I am the queen of compensation this is very hard because all my other muscles want to take over. Let alone the fact that it's so weak it fatigues after about 15 leg raises! I would have never guessed this was my problem because I am well endowed in the back end but I guess it's not all muscle.......ha, ha, ha.


As of today I am already feeling progress and when I ran downhill I could feel my left side trying to stabilize. I know it sounds crazy but it's true. The Physical Therapist couldn't believe I have made it this long with it being so atrophied, but I know I have been compensating so I am not surprised. I can also deal with a lot pain which again is probably an attribute of most ultra runners. I don't know anything about muscles from a clinical standpoint but I know we use our back side a lot as runners and especially runners who climb and descend. He told me the Glute Medius is the "runners muscle" and when it's powerful we can propel ourselves much better.
If that is the case and my left side is non-existent and my right side could be stronger then when I am done doing the "Jane Fonda" I should be really fast.......right???????? I doubt it but at least I won't have a pain in the butt!
Posted by Ronda at 10:58 AM