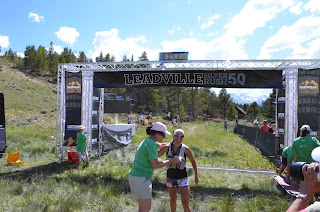 Both the 50M run and the 50M MTB were held this last weekend. The bike on Sat. and the run on Sun. We had big Oregon crew participating. Micheal and Drake did the Silver King which is a distinction given to those who do both the MTB and the Run. Bill did the MTB, Darin and I did the run. Todd chose the MTB as his second Leadman event. It was an action packed weekend and so much fun. The gruelling course does not dissappoint. 7,500 feet of ascent. All above 10,000 feet and we reach 12,000 three times. The footing for the most part was pretty good. Some rocky sections but I would say overall not a super technical course. That didn't prevent me from slamming my foot into a rock and stubbing my big toe so hard the nail lifted. That hurt!


Darin, Alex and I crewed the MTB ride. That was so fun to watch! Todd was so speedy I only got one picture of him and 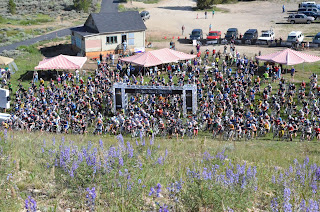 we never saw him again. The whole scene was really eye opening and inspiring. Action packed! They had 750 riders and of those just a handful of woman. The final female count was less than 30! Come on ladies we need to get in the game. This is very tough MTB course and anyone who lines up has my admiration. All our guys did amazing finishing well under the cutoff and not an open wound in sight or a bandaid needed! Bill had so much fun out there and once again he amazes me. I think this might be the 3rd time he has rode his bike and not only did he finish with lots of time to spare he had a total blast. He can't stop talking about it. Even more impressive is Drake and Micheal's Silver King accomplishment. 2 full days on that course and they posted impressive times.

As for my run, well, I am thrilled. I finished 14th out of 74 woman and 4th masters. Best of all first Leadwoman. I had 2 goals for this race. First, get my quads worked and second go for negative splits. I got a lot of strange looks because I chose the run instead of the MTB for my Leadwoman event. You get a choice with of which Silver Rush event. My strategy has been to train hard on the bike and use this 50M run as a another training 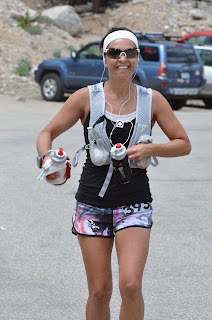 race for my legs. Though I am not worried about Leadville 100M run I will never ever take a 100M run for granted. Plus, I have never run a 100M race 6 days after a 100M MTB race. I suspect I will not get the big buckle on the run this time. My legs were darn tired going in to this race. The fatigue I feel from hard long rides is much different from running. I have a strong sense of my well being with regards to ultra training. The sore muscles, tight quads, some swelling from muscle damage and overall fatigue are all too familiar. The bike skips many of these. I get tight but in different spots. I am not sore and generally not too fatigued. But, what I am learning is there is a deeper fatigue that is a hidden and unfamilar. When I put my body to the test it becomes forefront and cumbersome. After finishing the LMTB training camp where I rode 125 miles I felt remarkably fine. I ran the two days then Todd and I did a 40 mile ride on Wednesday. I was completely beat on that ride. The hidden fatigue was no longer in the shadows! I rested as much as I could before Sunday. Trying to get as much repair as possible before Silver Rush 50M.


After the action packed day crewing I was ready to get out there. Almost craving the crazy ultra vide I knew would be present in this kind of tough course. I was ready to see what this body could do. With my all too conservative start filled with lots of good conversation at mile 8 I decided it was time to focus. Give this race some effort and make my body respond. Immediately I was bummed at how much the altitude seem to bother me. It was frustrating to have so much trouble breathing. I had to let it go because I was starting to get pissed. That certainly does not help the respiration! I can't tell if I was breathing so hard because I working hard or if it was the altitude. It really doesn't matter because I had to work with what I had. For the first 25 miles Micheal, Drake, Darin and I were all leap frogging and running fairly close together. That was fun. The views on the back side of Bald Mountain are incredible and pictures will not do it justice. At the turn I tried to kick it up a notch. Trying to reach goal number 2, negative splits. Goal number 1 was well in the bank. My quads were already thrashed. Honestly I can't remember them hurting this bad this early in an event. It's been a long time. I welcomed it. This is money. I will reap the benefits of this in the 100M run. I am certain of it! It gave me opportunity to deal with pain. To understand it and deal with it for a good long time. I knew on the way home I had about 9 miles of down hill. Not all of it but most the final 9 are down. With my quads already quivering I was curious to see how I could hold onto this run.


Coming into the final aid station I actually felt pretty good but was riding a fine line. A line where my body and mind walked the tight rope. My brain would process the terrain but my body was just one synapse behind. My legs were absolutely fried. They even looked the part, mushy and flat. The muscle damage had already set in and water was filling the gaps. With about 5 miles to go I stumble and my left leg just popped out of my hip socket. I walked and shook it hoping it would go back in the right spot. I got some mild relief but this certainly didn't feel good. Oh well, just another day in an ultra....right. The remainder of the run seemed to go on forever. The heat seemed over the top too. I gimped in under 10 hours. Overall thrilled but this might be some of the worst final 5 miles I have run in a very long time. Another good experience and reminder. This stuff is not easy but I guess that's why I keep coming back.


The biggest lesson I got this weekend was how much recovery I need between the 100M MTB ride and the 100M run. I have 6 days between those events. 6 days to repair my body for what I know will not be a walk in the park :)
Posted by Ronda at 1:43 PM