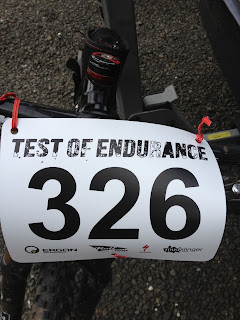 For someone who loves to over think things I sure seem to be NOT thinking lately. I recovered well from SD100M.  That's seems to be standard for me as of late.  My ankle is officially healed and I might stop taping it! Clearly I am not pushing myself to my limits in many of my races. I don't know why I can't line up to things with more confidence but I guess that will be something I can work on.

I signed up for the TOE 50M MTB race about 2 months ago.  I just assumed I was doing it until I looked at the date.  I paused but only briefly before I signed the paperwork committing myself to this beast just 6 days after SD100M. This race has 8,500 feet of climbing.  It's no picnic for the best of MTBers.  As a total beginner with the only real thing going for me is my staying power it tested me but good.

The weather was better than perfect, 80-85 degrees on Saturday.  We don't see that much around here.  I wasn't at all worried about the heat. I have proven I can sustain in those temperatures thanks again to Bikram  and a nod to SD100M.  Though I had little to no post 100M swelling and my energy returned quick I knew the deep quad fatigue would show up. The question was how soon and would I need to dismount?  Either way I was excited to spend the day in the mountains with Kristin who was doing her second ever MTB race. 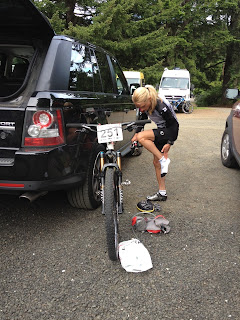 The field was good sized but not huge which was nice.  The course begins to climb right off the bat so the riders can get nice and spread out.  At MTB races you don't just line up.  They try and call the faster riders up front and seed the crowd.  It wasn't a formal seeding like Leadville but everyone knows where they should be and respects it. They need to keep the riders from crashing into each other in a desperate attempt to pass.  I got in the back where I belong and made my way up the first climb.  I felt pretty good but immediately started sweating buckets. Unlike running the cooling effect of climbing on a bike is not worth discussing.  You just drip sweat.  After 8 miles of climbing we his the first single track.  I glance back and see about 4 men behind me.  I let them go first knowing I need to get my bike under me and they will be on my wheel before I know it if I go first. Of course I felt like a bumbling fool on the first single track descent.  Here at TOE 50M the descents are pretty steep, sometimes hairy, a bit muddy and rocks and roots are like ice.  I wobbled, steadied and tried my best to relax.  Ya, right, relax....that sort of oxymoron for a control freak.  One thing the MTB is teaching me is trust.  I need to trust the bike and more importantly trust myself to use the bike.

At TOE we do 2 loops.  We don't go all the way back to the start but get 2 chances at the same stuff.  I was looking forward to that.  Knowing I would be better the second time around.  I would have more confidence and could take more risks.  The climbing is relentless.  It seems we never go down hill.  Though we obviously do.  A long 3-4 mile climb is descended on single track in less than 1.5 miles.  So it's fast and over before your heart rate fully recovers from the climb.  In addition, you don't just sit back and relax.  You are out the saddle using your legs to steady the tail and using all your body to maneuver the bike.  I felt pretty good for about 20 miles.  That's about the time the deep leg fatigue let me know I wasn't recovered.  I didn't expect to have even 20 miles of bliss so emotionally I was in tact.  The field was thinning.  I found my groove along with about 5 men and 1 woman.  Woman are not in abundance in the MTB races.  Ultras have far more woman.  Though the numbers are different there is a huge similarity in camaraderie.  MTBer's take care of each other.  It is not uncommon to see a sidelined MTB and rider with 1 or 2 people helping them get it fixed and back in action. If someone falls riders stop and make sure their okay.  They help each other and provide a lot of encouragement.

By the time I came to the 25 mile aid station I was pleased to have the possibility of a PR.  My skills have improved so much I can't even measure! I was slower on some the climbs but made it up in finesse. I at least TRIED to ride everything and was fairly successful compared to last year. I was off my bike about 3 times.  At the aid station the volunteers are swarming around helping riders.  They asked me if I needed any repairs and the only thing that was an issue were my cleats.  They were caked in mud and I was having a tough time clipping in and out.  They fixed that right up but then the mechanic sees my front tire is loose. Whoa...that would not have been good.  He fixes it and sets me on my way.

Half the race is behind me and I get to try out all those trails for the second time. I was excited about that.  I was not excited about the climbing.  I was pretty spent and on the steep cracking sections I struggled but vowed to stay on the pedals and not dismount! The thing about the bike is you can not let up!  There's no coasting or bringing it down a notch.  You have to have enough power to turn the crank so the bike with move!  Seems simple enough but at times it was really hard.  My heart rate would just scream.  It's all power and runners are not known for their power generation.   Me and my 5 companions traded positions time and time again. They would dust me on the descents and I would roll up behind them on the climbs.  That gave me a bit of a boost.  They complained or should I say we all moaned about the relentless butt busting climbs. However, I just ran 100M (which I kept to myself) so I felt pretty pleased to be able to pass them.  This jockeying went on the whole final 25 miles.  One of the riders was a crazy freak on the descents but he would dismount and walk up at times.  He was sick of seeing me.  On yet another passing he says, "Man you  are relentless".  He has no idea but pegged me well.  I told him I would see him on the final trail descent. 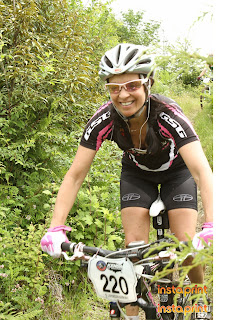 By the time my Garmin registered 45 miles I was on the hunt for the finish.  I had nothing!  My body was fried and if we had to climb another hill for more than 2 minutes I think I would have died.  The final stretch home was 3 good miles of gravel road mostly downhill.  We set in as a group and tried to draft.  Of course I was being left behind.  I got out of my saddle and cracked hard catching up and finishing just before my buddies.  It was a good day on the bike.  I got a 9 min PR but I would say that is all due to finesse.

Kristin destroyed her second ever MTB race.  It was thrilling to hear about her day.  She lead the woman's race for about 30 miles.  Amazing!  We drove home and recounted the day. Swapping dramatic MTB stories. Kristin has a good sized goose egg on her hip from a crash but she takes risks and is a great rider.  I have a pedal bruise on my leg and took 2 falls but nothing to talk about.  I wasn't going fast enough to launch myself.  All in all I'm glad I didn't think to hard and miss out.  I have recovered really quick from this and rode my best ever short track race on Monday.

The Trail Series Running Race tonight! Starting to pick up some running again.  After Prickett's Charge MTB race this weekend I have 3 weeks of solid training to get ready for High Cascades 100M MTB then follow that up with PCT 50M run.  I am interested to see how that back to back goes.
Posted by Ronda at 1:40 PM