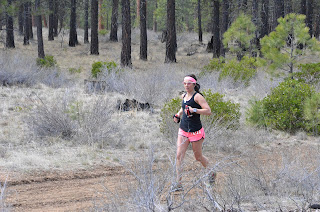 As I mentioned in my Umstead report my recovery was going very well. I was honestly barely phased by the race physically. However, just because I felt no pain the deep fatigue must be there. The week following Umstead was packed with personal things.  I had to take an extensive eye exam for glaucoma because my left eye has an irregular optic nerve. This test lasted 2 hours! Being the genious I am (not) I had it scheduled for the afternoon on Tuesday following Umstead. I had to identify blinking lights for 4 minutes per eye just to get the ball rolling. That day was probably not the best day to do such a test.  I was tired and seeing stars as it was.  Thankfully after 2+ hours of poking, screening, taking pictures of my eye I am cleared. Because I feeling so spry physically I couldn't resist a run in the Gorge on a beautiful sunny day.  By the end my legs were letting me know I was stupid. After that I tried to keep the running to dull roar so I could be somewhat able to run Peterson. I figured my true recovery would be unveiled as the race unfolded. Running a 40 mile race 2 weeks after a 100M PR looked fine on paper! 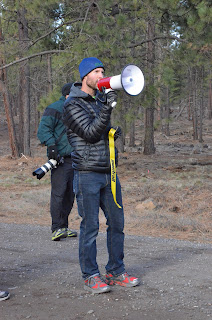 Central Oregon was gorgeous! The sun was awesome and the views of the cascade range reminded of my youth. I felt very comfortable. I had no plans for Peterson except to have the strength to take the turn at mile 23 and finish the 40 instead of calling it a day and taking the 20M option. I hoped I was on some sort of high point when I had to make that choice.  In hindsight, like anything we do, it's mental.

Right of the bat I had a governor attached to my body. I had no gear beyond where the governor had been set.  That was between a 8:30 and 10:30 depending on terrain. Even on the downhill stretches the dexterity in my legs was compromised. I had no issues with the pace but found it interesting. I pondered what that meant.  How was my training playing a role? Is it even prudent to ask that question since I was just off a 100M?  Anyway, as the day progressed I seemed to hold steady.  Not in any REAL pain but rather just mild aches. Just your normal running stuff however it might have set in a bit earlier than normal. 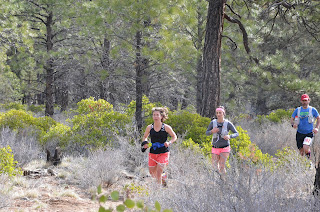 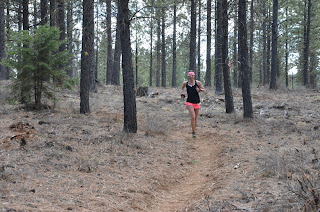 None of that really matter because I was having a glorious day. Peterson is my kickoff run for the Spring/Summer ultra running season. I love the feel of that race. Sean does something special there. He really cares about all the runners no matter what level of runner they are. I am pretty sure that's why I love it so much. He's a humble guy and treats all of us like we're special. Because of that every aid station and course volunteer do the same. At the last minute there was course change which left my airhead brain very confused. I couldn't figure out where I was or what mile I was at. I also took 3 bone head wrong turns. The trail system is pretty extensive and I was looking down way to much. 2 of the detours happened before 20 miles. When I arrived at the last aid station before I had to take that turn and forever seal my fate I was feeling pretty good. The race is now shared with 20 milers and that's always fun. The turn came up before I knew it and I dove in without blinking.  I took this as a good sign. I made my way back up the ridge and after the 26 mile aid station I took another detour.  Though I wasn't pleased with putting in any extra miles I wasn't all that upset either, weird. I think that's a result of very low expectations.  Since I had set my expectations at a 7:15 time goal missing turns and logging more miles wasn't a big deal.  Mental, running is mental :). This part of the course was new from last year. The re-route was worth it!  We got to run back up on the ridge where the mountain views were incredible! The trail wound around a manzanita forest. I cruised around there getting sunburned and loving it!  Bopping along to the Monsters and Men album (This is my favorite song. if you listen that might explain my demeanor). Alex has promised we will do this duet for Mothers Day :). Bill crewed me the whole day. Seeing his enthusiastic face often was another high moment. 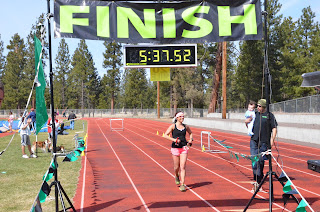 Though I was cruising around at my same old speed and having a really nice day I was really wanting to see the final aid station. Since I was so confused about the mileage I was hoping to come in and find we had 6 miles to go not 10.  I don't think I was up for much more.  When I finally found the station that was my first question. And as with all races once it was confirmed I only had 6 measly miles to go I perked up.  I finished in 6:37, last year 6:36 and the year before 6:35.  I don't even know what to say!  Clearly I have one speed.  I was thrilled! After discussing my run with a friend.  I asked, "Where do you think I should go from here"?  Reply, "Don't get injured".  Good advice!  I have stacked my year with ultras and MTB races.  It's tight but I am really having a blast!
Posted by Ronda at 1:11 PM