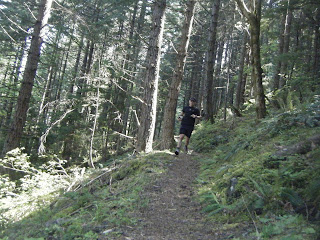 Black Saturday was record breaking on both the climb and the descent. 2005 was the first year I started working with Scott and it was the first year I ever thought I would be running up a hill in the Gorge. I remember the conversation like it was yesterday. It went like this. Scott says, "I need you to find a trail in the gorge that climbs consistently for about 4 miles". My response, "That shouldn't be a problem". Scott replies, "It needs to be a grade that is less than 9% so you can run it". My reply, "Huh.....I am going to be RUNNING up it". With his general casual demeanor he replies, "Sure, you will be able to do it". Then he just moved on with the other items as if it was normal. I stewed and thought for days about how it would be possible to run such hills when power hiking them is difficult enough. Luckily friends who were familiar with every inch of the Gorge offered up two great trails that fit the bill. The first time out to perform the workout I felt so incredibly anxious like a kid on the first day of school. With my eager to preform personality, desire to not let down my new coach and most of all prove to myself that this was actually possible left my stomach in knots with fear. To my utter dis-belief it was possible and I was able to run up something I would have never considered attempting prior. It was so hard but it happened. That experience alone changed my whole perspective of hills and more importantly my own abilities. So it went on and Black Saturday became a staple of my training. It has to be one of most satisfying workouts ever. When I leave I feel like I have accomplished so much in such a short period of time and it's a true test of my fitness.

We had fresh blood this Saturday on PCT off Herman Creek and the 400 trail. Cheri joined us dressed in full black, smiling, excited to see some new trail and push herself on t 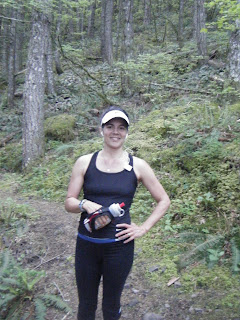 he hills. Steve, Micheal and I had 2X40-45 minutes which for me is the first clearing on that section of trail gaining 2200+ feet in 3.2 miles. Running up the trail was relatively comfortable for a threshold workout. I could feel my glutes from my weight training but other than that I felt pretty darn fresh. The trail was in fabulous conditions and it just felt awesome to be back out there again pushing my limits with friends. As we crested the climb for the very brief flat spot I knew I had a good shot at a new record. On the very last switchback and the clearing in site my watch flipped to 43 minutes. I touched the open view point in 43:39! My previous fastest time was 44:06. Since the object of hill repeats is to push the descents just as hard as the climbs I got re-focused and tried to let it rip. I reached to bottom in 24:37....at least one minute faster than any other time. I felt so IN IT on the descent, strong and in control. That was some of the best single track downhilling I have done in forever. The best part about the whole thing was I ready to do it again. I wasn't dreading it and my legs weren't jelly. The second ascent was harder and my legs has less spring but instead of willing the clearing to appear I got lost in the moment. I wasn't even wishing it end, for the pain to stop or the breathing to be easy. The goal of repeats is to be as strong as the first one. If you fail then you have pushed to hard on the first one. I reached the clearing in 44:05. A tad bit slower but I was still over joyed since again it was faster than my previous record. The crescendo of t 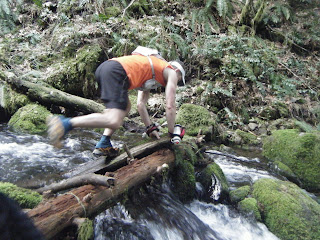 he whole thing was my descent at 23:50! That's a 7:27 pace on rocky single track....for me that's mind blowing. Olga???? What do you think? Your the downhill monster and you have crushed this trail before. We got in 5,630 feet of climbing on our 17 mile run. Now the bar is set pretty high but I am just thrilled to have made any progress on threshold workouts. 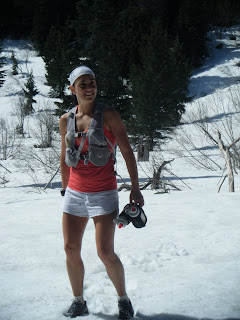 Sunday we went in search of snow and we found it. Not only did we find snow but the water crossing were swift, deep and cold. The first few we attempted to stay dry then we just gave up as Steve drove home the fact that Hardrock has lots of water crossing. Our plan was to head up the Herman Creek trail as far as we could go. We were willing to travel through snow if we could find our way to the PCT but if we couldn't follow a clear path we would turn around and on our way back climb up and over Nick Eaton Ridge to the cutoff trail and down Gorton Creek and back to the car. We got almost to Mud Lake before we were in a sea of snow with no place to go. "Where is that darn trail"? It was a pretty awesome sight to reach the opening with Tomlike Mountain in the back ground but absolutely everything was under lots of snow. It is melting but man after 3,100 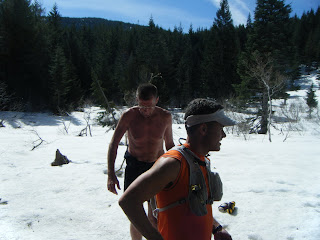 feet it's still deep. Since we are having a much needed heat wave the snow was soft making for some funny post holing scenes. When Micheal found himself in this situation I was laughing so hard I almost hurt myself. Steve was no better off except his long legs stopped him from looking like he was suspended by snow. I got one good leg dump. This 5.5 hour run was not easy and the temperatures were hot. I was actually sweating like crazy and I never s 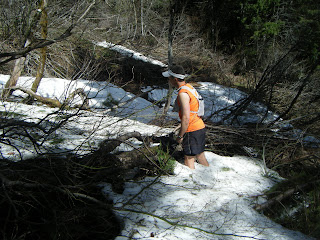 weat. I wish I did but generally I am like a camel. Not Sunday though. I was soaked and it felt great. The 2 mile mile steep climb up Nick Eaton was hard on all of us but we made good time just to treated to some of the sweetest downhill in the Gorge (my opinion of course). After the short cutoff trail over to Gorton Creek we got to run down for 2.6 miles of pure bliss! This is one of our short hill repeat haunts and since we haven't been on it for awhile I forgot just how awesome it is to fly down this baby. It's a must do for Gorge run 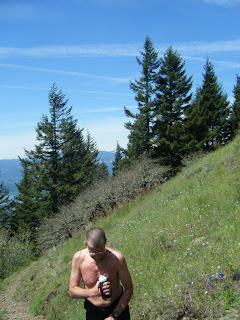 ners. The strong finish to our 5.5 hour put some serious smiles on our faces. I think all three of us must have said, "Awesome Runs", more than 5 times each.

That ends a Build 1 week and my mileage is creeping up. I may hit near 100 on my peak week. My goal is to maintain this level of strength as I make my way through this first cycle of the Peak Phase.
Posted by Ronda at 10:34 AM