Rehab is a full time job! 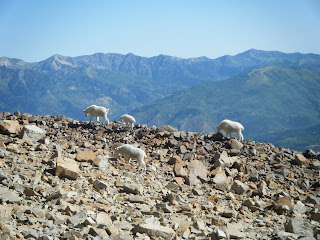 That pretty much says it all. It truly takes a lot of time to do all the exercises, icing and such but it works. My knee has made significant improvement with the physical therapy. When I first got here I couldn't even walk the downhill of downtown Park City. Getting around and in and out of a car took thought and just the right approach. It was super frustrating to have been slapped silly so quickly. This injury really took me down much more than I could have imagined. It came on so quickly and with such vengeance it actually had me worried I may have done something more permanent. Thinking back on the whole thing from the beginning I believe it started with the fall I took on the 3 corner rock run. Even though the fall was nothing the tork on my leg was fierce and stretched my quad pretty good at the insertions above my knee. The force on my leg was healing up well but WR50M just drove it home leaving me limping and truly out of commission. I think this was a pretty good lesson.
In the big scheme of life of course this is nothing but when something begins to impact your everyday life it becomes something. My leg has been so sore from all the exercises but I am back to running/jogging trails.....yipppeeee. Here is a breakdown on my progress.
Monday - Saw a physical therapist, got a diagnosis, exercises and some ultra sound. - Workout was speed strides on the elliptical. Knee was super sore and I was not putting much weight on it.
Tuesday - Warm up on elliptical for 30 minutes then hit the treadmill at 6% incline to run - was halted by pain and forced back on the elliptical for the remaining hour. The exercises were challenging as my knee was super swollen and sore - iced like a freak.
Wednesday - More physical therapy and they progressed to harder exercises and dug out my IT band even though it didn't seem to present a problem. They ultra sounded and put some anti-inflammatory rub stuff on it. My workout was hill repeats so I chose the road to silver lake which is 3.5 miles and about 2000 feet. Bill picked me up at the top and I was supposed to repeat but the pain was just too much so I called it good with one trip. I was super frustrated as the pain seemed to be worse but the swelling less.
Thursday - Big turning point my kneecap was in the right spot- Woke up with barely any swelling or pain and.........when I looked down my kneecap appeared to have moved back where it belonged! It was an off day and we walked around including downtown and I was able to pretty much walk normal without pain. Some buckling but no sharp zingers. I did all my exercises and iced.
Friday - A planned run up Mt. Timpanogas on the steep side and down the less steep side. Now steep is relative since this climb is 4,500+ feet in 7 miles to 11,500. It is one of the most beautiful places on earth as far as I am concerned. Deborah was aware I might not be able to push or run the down and was fine with that. The hike up wasn't without pain, a few mild zingers and the leg motion was weird as if it didn't want to function. As the hike continued it began to feel more normal but I could see some swelling coming on. The down was a total walk for me. I trotted occasionally but it wasn't going to work. I was happy to have done the 15 miles with only mild pain. 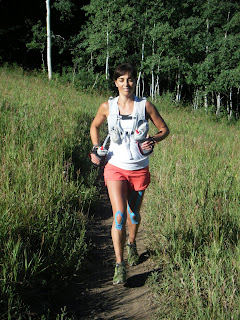 Saturday - HELLO MAGIC TAPE!! Back to the physical therapist who was blown away on how good my knee looked especially after the Timp workout. I too was pumped to still have my kneecap properly seated and have NO after effects from Timp. Today was the introduction of the magic tape! After physical therapy I took the Spiro trail up (about 1,700 feet) to the mid mountain trail and ran/walked that to Silver Lake where Bill picked me up. It is a little over 10 miles. The run was good for about 5 miles and 3+ was straight up. The rollers were painful but the tape did help my mind make the muscles fire. My muscles were quivering afterwards as if in shock. :)
Sunday - Still wearing the magic tape (it stays on for 4 days) Micheal, Bill and I headed out for the same run I did on Saturday. It was harder. My legs were tired and my knee ached but the motion of running was much more normal......a lot less limping and favoring.
After three days of good movement my leg was sore and fatigued but not worse and every day I woke up it was better. Sort of like 3 steps forward 1 step back. I was just so happy to have made so much progress in such a little amount of time. Mostly I happy to NOT be in pain when I walked around doing normal stuff. 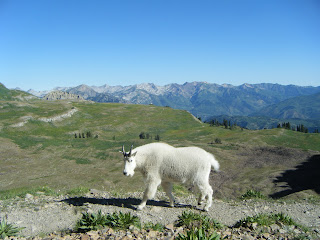 Monday - Back to the physical therapist who did all her stuff, re-taped me and said, "It's time to test it, give it a go on the downhills, work through the discomfort and let's just see how it responds". So..,,,,,,,,
Tuesday - BACK TO TIMP! We took the whole family and Micheal, Deborah and I headed up for speed and a run down while they hiked. It was beautiful as usual but the biggest wonder was the mountain goats. We were early on the trail and saw the whole herd. It was something else and very special. GOOD LUCK! That's how I chose to see it. My knee was better and I only had mild pain. I braced it up for the downhill and was able to run about 80% of it. It's a super rock trail and I was slow but it was running. I had a couple of mild zingers and my knee was a bit pissed but I came out no worse for wear. We hiked back up to meet our families who were on their way down. It ended up being a 7000+ day for us but the most amazing thing was our families. They hiked 15 miles to the top of a mountain on rough terrain with no air. Micheals wife Lisa and his daughter Kerry who is 8 plus Bill and Alex who is 12 really kicked butt and persevered on a long 10+ hour day. It was pretty amazing to see the kids remain positive and enjoying the sights.
Wednesday - Physical therapy again and just one more left before I am on my own. My knee is still good, not much better but not worse. No pain with everyday life stuff and not pissed from yesterday. Due to that I made my decision to go for it at Teton's.
I figure I can make it through the race and not cause myself to take to many steps backwards. It won't be a great performance and I may need to take walk breaks on the downhill to preserve myself. I might even need to dull the pain with Advil but I have enough time to finish. I might even make more progress with my knee by race day. All I can say is the exercises and advice I was given was spot on and worked. It's not easy and not very exciting and honestly quite boring for an adrenaline junkie but it works. 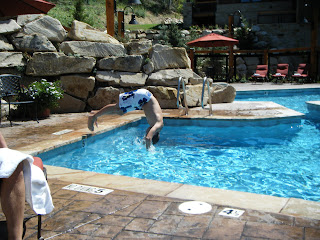 Even though it seems like all I have been doing is obsessing about my knee I haven't. I was actually NOT obsessing rather just doing what I needed and still having a good time. We have been swimming, biking, zip line riding, visiting farmers markets and enjoying vacation with friends. Today we were at a farmers market and there was a girl with a big sign that read, "I Can Fix You". Of course I was drawn right over and signed up for fixing. It was obvious what my problem was with the lovely blue tape all over my leg. If you can't be an olympian you might as well dress like one...... ha, ha, ha. She did reflexology and while I am not sure I can buy into all they claim I went with it, why not???....I have blue tape all over my leg so it's clear I am open to pretty much anything at this point. All in all this has been interesting, challenging and a good learning lesson.
Posted by Ronda at 2:58 PM