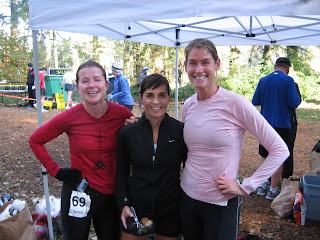 There's nothing like a good short road run to get the fire burning! Ultra runners can run short fast runs ya know and probably should run more of them. Why???? Because it reminds us that we are actually runners........and leg speed and cardio strength are important aspects in ultra running too. When we need to get up the steep hill late in the race we need the cardio strength to aid us in the ascent, when we run downhill it's all about leg speed.....how fast can you complete the stride vs. braking while your leg comes back around. If none of that matters, then do it because it's different and can be super fun!

Stacey and I talked Susan into running the 10K instead of the 50K. She's training for her first 100M race (WS100M) this coming year and hasn't run anything short in over 4 years! Boy do I know that story because I was same. Short road run....are you kidding, I'm a trail runner, nothing but dirt and endless undulating terrain. Well.....I got converted, as much as an ultra runner can be converted. I started do this routine in the winter months three years ago and swear by it as a way to jump start the upcoming season of training and racing. Also, just simply to change things up, have some new experiences and get my 40 year old legs moving faster after a long and glorious ultra season.
The Autumn Leaves 50M/50K/10K was a blast as usual....I am sure your sick of me saying that after ever race but it's just the truth, a total blast! Stacey and I went out early to help out Olga at her aid station but she definately had everything under control so we all talked and laughed for 2 hours before Stacey, Susan and I started our warm up. It was freezing while we were just standing around but once we got moving it was fine. My feet took about 10 minutes to un-thaw but after that it was shorts and long sleeve for the run.

Since this was a VDOT run to 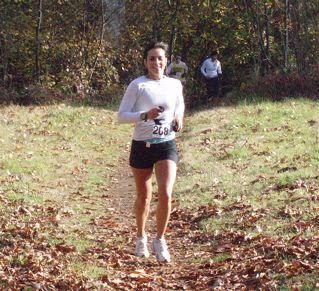 establish a starting point for M-Pace, T-Pace and track efforts I was going all out! Now, all out for an ultra runner is different from all out of a good road runner....we're slower :). Nonetheless all three of us put our best foot and lungs forward and ran into the wall, then backed away from the wall, ran into the wall and backed away from the wall for 6.2+ miles. I describe my attempt at speedy roads runs just like that...run into the wall then back away from the wall, no strategy, no game plan, no idea what I am doing but I do know my lungs are burning as I try to propel my ultra legs forward. My race was slower than I imagined and I am sure the course was long because I ran this race at a slower per mile pace than the 15K I ran a couple of weeks ago. But.....I am sure the ultra folks didn't even notice because it wasn't overly long but when your running a 10K you become sensitive to these things:). This made me laugh because if I was running the ultra I would have never even noticed or cared about the extra 2 tenths of a mile. For me, this means I will get a lower VDOT with lower coinciding M-Pace, T-Pace and track numbers. Do I care? No way! It's early and the slower the build up the better. Also, I have another 10K in early December which I have run 3 years in a row. With the slower build up I have time to get my body adapted and hopefully I will see some early results at that 10K. My time for this 10K was 47:56 and I will get my VDOT number from Scott on Tuesday. 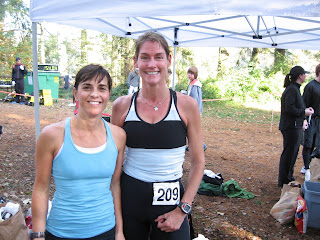 Today Stacey, Tom and I went for a 2 hour run on the Wildwood and mostly a Z3 effort. Stacey and I both felt our hamstrings but after about 40 minutes were able to push well into Z3. This coming week is a "Peak" week as Scott put me on 4 week cycles instead of 3. I have done the 4 week cycles before and loved them because they are hard and very challenging. But, I had to cry "uncle" last Spring and move to 3 week cycles because I was getting my butt kicked :). Careful what ya ask for Missy...........
Posted by Ronda at 3:04 PM