It's already Thursday and it's been a wild ride this week. With Bill in the Middle East for business and me stressing about that, workouts, storms, dogs, cats, salt water tank, turtles, carpet cleaning, school and all Alex's activities, box elder beetles it's been go, go, go! All just normal life but when you do it alone it's exhausting. Long business trips don't come often but when they do I am reminded how fortunate I am to have such a great marriage and life. Easy to just take all that for granted when it's part of the norm. Okay enough whining. 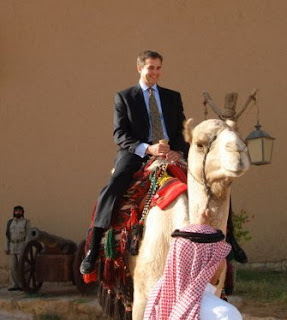 d experience. He emailed me a few pictures of him doing business and traveling between areas on camel, yes this is real and not a joke. He didn't see a female for 3 straight days because where he was they are not allowed to drive, eat with the men or leave their home without being in a full berka (sp?). When he was telling me about it over the phone it was so weird to think about a life like that. I couldn't even imagine what it would be like and probably would have been in jail or whatever by now because I am such a rebel when it comes to stuff like that.


On the home front we had a bad wind storm on Monday which took down power lines at the bottom of our road. The power was off for over 16 hours and since we get our water from a well and the pump requires electricity we were out of water too. My car was in the garage and the garage door needs electricity to work so I had to pull the emergency cord and lift the door. Now this is all just fine but we have a wood door and it was so heavy it took both Alex and I to get it up. The PGE guys actually drove up to my house to let me know the status....who says there's no customer service anymore. Since we live out in the boonies I had no phone because of course the phones need electricity and my cell only has 1 sketchy bar so the PGE people kept me informed. There were only 16 homes effected by the downed line but since it was over a quarter mile long it took awhile to restore. When it did pop back on at around 2 a.m. it scared me to death!


Rattled the next morning Alex left for school without his belt. Now I know the school has a uniform policy but come on.....he forgets his belt and they call me to bring it. I was already all the way downtown when he called, "hi mom, I forgot my belt again". Argggggggg....that darn belt, it's the 4th time he has forgot it. So I decided I would scatter belts all over. I stopped at Target and bought 3 black boys belts which brings his black belt collection to 4! I dropped one off at the school, put one is his locker and one in his backpack. Now.....if he forgets his belt I won't be driving back home and then to the school to deliver the not so necessary black belt. When I showed up at the office with 3 belts the office lady said, "that's just enabling him" and I said, "no, it's teaching him to be prepared"! If I was in charge I would have another way of handling the forgotten belt problem. :) Oh well, rules are rules......


On the workout front all is good. I think I have successful destroyed every muscle in my body from the waist up. My great idea of mastering the one armed push-up has sent my upper body into a full blown mess. All the pain is healthy but I am not sure if this much healthy pain is healthy if that makes any sense.:). My mid section hurts so bad I have to brace myself to laugh and if you know me at all I am constantly cracking myself up so I am getting efficient at the pre-laugh brace technique. I had to bend over to wash my hair this morning because I can't get my arms above my head and they are certainly not going to perform any massaging motion. I developed a great method for getting my shirt on. I lay it on the bed, then bend over, scoot my head inside the body of the garmet then in mummy form wiggle it down until my hands can reach the bottom then stretch it as far as I can without ripping the fabric and slide my arms in the holes. Since my lower body is not effected by the one armed push-up workout it was good to go for both my hard workouts. Tuesday I met Tom at the track and we did the workout together. It was much better than last week and my body seems to be remembering how it's done. Today was tempo with some M-Pace and T-Pace running so Susan joined me. We each have our own paces so after our 30 minute warm-up we began our quality portion on our own. I felt a ton more in control compared to last weeks effort. I actually had to throttle back quite a bit as my first T-Pace mile was a 7:10, way to fast and not necessary now. I got into a good groove for my 7:40 pace. My upper body protested and my arms soaked up the warm-up but I might even be more sore now.
Posted by Ronda at 3:27 PM