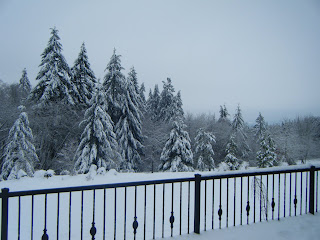 This is a picture off our back deck! We have been thrown into a deep freeze here in the Portland metro area. Some city's and county's have declared a state of emergency. See we are sort of snow pansy's around here and they have mayber two snow plows for the city so the whole place shuts down. I grew up in the snow but have spent the last 24 years forgetting what's it's like to live, drive and run with the streets and trails covered with serious inches of white stuff not to mention the lovely thick layer of ice underneath. Besides being stuck at home and sometimes without power there have been some funny times. The news is 24/7 arctic blast coverage and the cars, oh my, the cars and people. There are AWD vehicles with chains on the back tires (what!), cars abandoned on the sides of streets buried in snow and ice, people trying to cross streets when cars that most definitely won't be able to stop are approaching. Those are some of the funny sights when you ask yourself, "What"!. I myself have been chauffeured around by Bill who has his 4X4 SUV chained up. The city is empty! It is really creepy to see how halted we are. The grocery stores are bare, no deliveries of goods to the homes, garbage hasn't been picked up for over a week. Bill has lived here all his life and can barely remember 1968 when Portland got almost the same amount of snow. Needless to say it's been weird.
I did venture out today in Bill's car (he took mine to work) and I drove about 10 MPH. Due to the huge ice ruts we have created on the roads it was wild. Where was I going?? To the gym! YES!!! 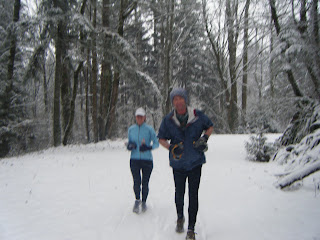 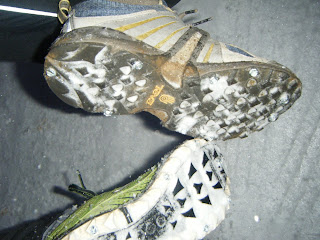 Saturday, just after the mini snow storm and just before the mega snow storm a few of us headed to Forest Park for an 18 mile run. Trisha, Susan, Steve and I had a great run in the soft powdery snow. We had our studded shoes on and the traction was fabulous. It was quite a sight to see the park under so much snow and barely a runner out. We did see a cross country skier and some cross bikes (they were having a bit of a hard time) but other than that just a few folks out enjoying. I had some scheduled speed work during the long run so I turned back early and found a go0d 2 mile section to pick up the pace. I ran back and forth until those guys came back. My speed was shall we say...not great! But...my heart rate was in the sweet spot from lifting my legs so high to clear the snow. Sunday we were buried in snow. I was starting to 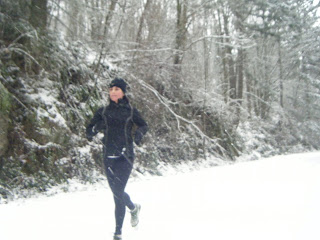 go a bit nuts so Bill and I headed out early to do some shopping. There was no one on the roads. The city was in shut down. It was fun to be out.

Monday: Boot camp was awesome! Not everyone could get there but to my surprise my friend Sarah showed up. She braved the elements, got herself out of her driveway and joined Darin and I for a killer workout. Now for running....I went on the hunt for some better traction devices just to find that all 4 stores I tried were sold out. Seems everyone had the same idea. This stuff is going to stick around so it's time to get prepared. I am ready to cross country ski bull mountain if necessary even though I don't know how to CC ski! I have now embrassed the situation. Time to toughen up. Once power was restored to our house I got on my treadmill for a good 7 mile run which lifted my spirits. I have felt so sluggish I told Bill I might be going into hybernation. I am not used to being limited and clearly have gotten spoiled by my running freedom.
Tuesday: The gym says they are open! I need to get out so I made my way there and spent close to 3 hours working out and loved every minute of it. I did my M-Pace 10 mile run on the treadmill and actually loved it. I am rested! My heart rate was pretty low for my 7:32 pace. I had a 2% grade going but I think I am was so excited to be sweating I had some sort of high going. It seems when I have a purpose and a specific workout I am seriously motivated and the treadmill actually becomes inviting. Afterwards I headed into the weight room where I couldn't seem to get enough. I drug myself out of there knowing I am going to "Get Hammered" tonight. At one of the "Get Hammered" classes last week Mark had us build a snowman. It looked easy but it wasn't. :) I would say we did a pretty good job. Our snowman definatley has a spare tire. 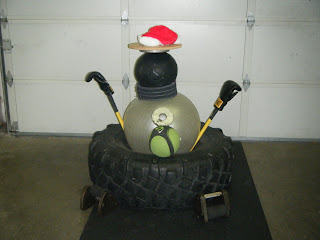 Tomorrow is another recovery run and I am going outside no matter what. I just need to be sure I have enough room to get out the way of Portland drivers. :) Christmas Camp starts on Thursday and it's going to be a tough challenge this year but that makes it all the more satisfying. This weather is making me dream about a lot of California and Arizona races. :0 I might find a couple on my schedule as everytime I look at one I sort of hit the "registration" button.
Everyone have a fabulous holiday with family and friends! MERRY CHRISTMAS!
Posted by Ronda at 2:12 PM