After the Mac I had a recovery week and it was a relaxing splendor. The PNW got hit with a crazy heat wave sending temperatures into the 90's! From 50 to 90 in a matter of days turned our neck of the woods into a lobster fest. Everyone was out in about in shorts and tank tops for the first time since last summer soaking up the glorious rays of sunshine. Two days later it looked like a lobster feed. Alex had 5 solid days of baseball. That meant 3+ hours each day in the heat of day at the ball field where parents were dying of heat stroke in the stands and the kids looked like wilted lettuce. I actually loved it but I had the advantage of a little color and a higher tolerance for the elements. I was however a mama freak, covering Alex with sunscreen and making sure he was drinking enough. He sent me back to the stands about 4 times and begged me to stop embarrasssing him. Oh where has the time gone......he doesn't want him mom hovering over him? Our heat wave was short lived because we are back to 50 degrees and drizzle.

Monday was the beginning of the final training push before Bighorn 100M. I have 3 weeks of big mileage including a ton of quality work. I was actually a little gun shy when Monday rolled around, maybe I had too much sunbathing, resting and not enough intensity. Knowing that it's time to gear it up mentally and physically I called on my motivators to give me a good kick in the butt. All my recovery runs are now 70 minutes instead of 45-60. On Tuesday it was 5X1200M on the track. No more 1000M's! This was tough workout for my sleeping muscular system but it got woken up and did what it was supposed to do....all under 4:40. Wednesday was my only day off of running but I had to tear up my upper body again. I was still sore from Monday's workout but I hammered out a nasty chest and back workout.

Tempo running today and it 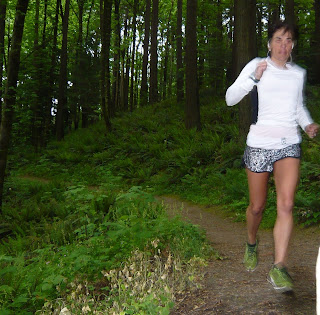 was turning point for me both physically and mentally. I was on fire for my 9 mile run tearing up my tempo portion all at sub 7:10. I even had two at 6:48 and 6:42. Way too fast since all were supposed to be at M-pace (7:40)but my HR was in low 3B so I went with that.....shame on me! My two fastest miles were because some whipper snapper tucked in behind me using me as his pacer and I couldn't resist making him work. I finally came to my senses and let him pass but I didn't like it......I was channeling Kris! Trisha is back in full swing training for her next ultra so Thursday's have been our traditional running time together and coffee afterwards. It's so nice to have someone out there suffering along with me leaving no room from slacking off!

This weekend a bunch of us are heading to central Oregon for a weekend of killer running around the Smith Rocks area. There will be a large group of those fast folks from the area out there so it will be fun. Saturday we are doing our 2X55 minute hill repeats at Grey Butte. This is supposed to be the perfect grade climbing 2250 feet per ascent then a fabulous view at the summit. Sunday we are doing about 7 hours out and about in the area. Jeff (bronco billy) has given us detailed instructions for his favorite Bighorn training loop of about 28-30 miles with 6500+ feet of climbing. This will be a family affair for this big camping/running trip so lots of kids, bikes and eating. It's going to be a great Ultra Family vacation in new territory.

In preparation for the trip I to prepare all my meals for 2 days. It was am 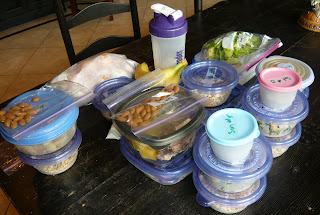 azing when I laid it all out and saw just how much food I eat, wow! I am up to 3,900 calories on a training day not including all I consume while running. There are a couple of missing meals because I know we are BBQing one night and having lunch with the central Oregon crew after our run on Saturday. Yes....all the meals are labeled so I know which one to eat first......kinda nutty but I like it! Kris stopped by with her new BF so I hope he still likes her after meeting her freaky food friend. Since she is on the same plan at least he knows he will never go hungry. :)
.
Posted by Ronda at 11:28 AM