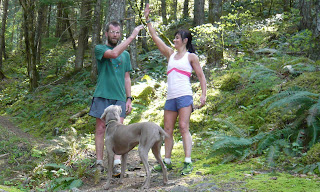 Steve, Ultra and I did our hill repeat workout this morning. We met at Herman Creek at 7:30 a.m. for the 3.5 hour run which included 2X45 minute uphill runs at threshold. We used the PCT trail which has been our standard hill for the last three years but with the low snow levels this was our first trip out there.

Finally looking like a nice sunny day we were pretty excited to see how far up the trail we could get. Generally I get to the first clearing in just under 45 minutes so that was my goal for today. This trail is much steeper than all the others we have been using for Black Saturday's so I was anxious to see how my hill running was measuring up. Since I have a bunch of splits for this workout, data analysis would be easy. :) As we made our way to the base of our repeat hill I noticed the lack of poison oak. Only tiny little sprigs were coming up not the bushes we usually see this time of year. It's been so cold not allowing the evil bush to flourish. For me that is spectacular news because I am super allergic. I was covered with Ivy Block for insurance.

We arrived at "pain junction" (that's what I call it) where we lightened the load and headed up for climb number 1. Steve took a head start so I could use him as the carrot which always works nicely for me.....and I think it helps him too. The trail was covered with debris. Lots of small branches covered the rocky terrain but nothing huge and annoying. There were a couple of small trees over the trail but we could easily jump right over them. We found our first snow drift at about 35 minutes but not big enough to slow us down. I was surprised at the lack of snow at 3000 feet given wh 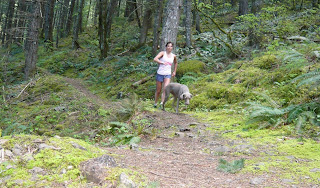 at we saw last weekend. This area does get a lot of sun so I guess it makes sense. I arrived at just below the first clearing in 42 minutes. The snow all of the sudden took over the trail but I was within spitting distance of my destination. I was pumped! I would have been there in another 45 seconds meaning I broke my record by 1.5 minutes. Now I know 1.5 minutes doesn't seem like much but at threshold any increase is big news! :). This 3.2 miles climbs 2040 and I ran every step comfortably. Off we go back down to refuel and head up for number 2. Coming down at lightening speed was difficult with so much debris. It made me unsure of my footing even when I tried to relax into the downhill like Olga does. I made it down in 25:32 which is good but not a record. A quick refuel and off we go again. This second one was harder but I knew I could hold fairly steady. Steve was again ahead and when I had to stop to tie my shoe he took advantage of it by working extra hard to create more of a gap. Once I was back in action I used my 1 minute shoe 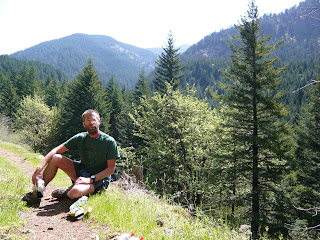 tying rest well by picking up the pace. Steve saw me on the switchback and yells, "I think I can maintain this gap". That's all I needed to hear! I yell back, "We will see sucker". The chase was on and I ignored my burning quads and my screaming calves....sorta. He would glance back and see I was getting closer and pick it up. At the ridge with about 5 minutes left he lets me know I only have 5 minutes to catch him. He leaped over the fallen tree with his very long legs and as I approached I contemplated not even breaking my stride and bursting into a leap but came to my senses when got closer and realized it's above my waist. This forced me to slow and crawl over it but once over the tree I sprinted almost touching his shirt before he yelled, "Time". I glanced at my watch and see I was within 40 seconds of my first split, not bad.
We finished, high fived each other and trotted 30 minutes back to the car. What a great 18 mile run! On my way home I shoved my face full of food and anticipated my much needed ice bath. I calculated to see if I could get it all done before Alex got out of school. When I got home I drug two 9lb pound bags of ice into the bathroom, took my warm shower then dressed for my desired torture. With compression shorts, socks and a sweatshirt I submerged myself into the freezing bath which was all they up past my waist, grabbed the phone and talked to a friend for 25 minutes. This was the perfect way to distract myself from the frigged suffering. After 25 minutes I got out and felt ready to take on the Mac tomorrow. Micheal said he was going to run the whole race with me. That will be a slow day for him but it will help me run faster.
Posted by Ronda at 2:33 PM