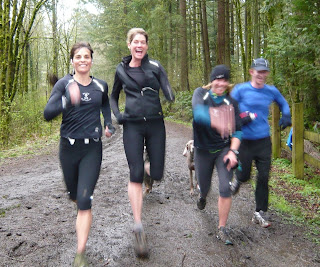 The snow fall in the higher elevations left us doing our weekend runs in town. I live at about 450 feet and snow was falling off and on all day Friday. We normally like to do our hill repeats on the Gorton Creek trail in the gorge but that trail is definitely under a blanket of white. Instead we used Saltzman road in Forest Park. The total length of the road is 2.9 miles and climbs about 1000 feet so not too steep but it would do the job. Kris, Stacey and I all had 2X30-35 minutes at AT on an incline after a nice warm-up and .5 miles at M-Pace. Darin decided to join making our group 4. As we were heading down the road chatting in our Black Saturday outfits we ran into Caroline, Liz and Kamm a 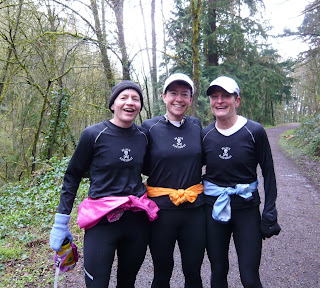 ll dressed in their Black Saturday shirts doing hill repeats too! That was really cool. It was an intimidating group all dressed in black looking very strong and focused. Although we appeared intimidating in our minds the other folks out walking dogs and running didn't seem to act scared. :) Hmmmm, six woman running down the road, dressed alike and screaming happy things to each other would be scary to my husband.....maybe that's why we lost Darin for awhile..........any whooo.

When we arrived at the bottom of hill, turned and headed up Kris was out like a rocket. Darin gave a....wow giggle as she shot up the hill. Since I have seen this before I just said, "Go get her"! This would be the first time I have had hill repeats long enough in duration to get me all the way to the top....I hoped. I settled in and watched my heart rate climb steadily as my legs got in the groove. Within about 4 minutes I had settled into threshold at about 171 beats. I can go as high as 174 but no lower than 171. I moderated it off and on as I reached my familiar landmarks at 1.3 miles and 1.9 miles. I seemed to be about 1 minute ahead of schedule from my past times so this could be a strong day. A day when I see the fruits of my labor as they say. Motivated, I reached my last familiar marker at 25 minutes and I knew I was close the top. I arrived at the gate in 28 minutes! This is great for me. We all ate gel and drank liquids then sprinted off down the hill. Since the incline is not really steep and it's a gravel road the downhill can actually be RUN! As we descended Kris confessed she reached the top in 25 minutes and ran out of road. We said, "No worries, you can just go down farther onto the paved road". She replies with a sly voice, "You guys always have an answer, don't ya". Laugh, laugh, laugh but she's right. When we got to the bottom Stacey and I just stopped at the gate as Kris continued on the road, walking down it like a lost puppy. We waved her further yelling, "Go at least 2 minutes down to get 5 up"! She was walking very sloooowwww, looking back as we continued waving her down. She clearly didn't want to go as Stacey yells, "It's lonely at the top.....keep going". I said, "You can try to catch me"! She replied with a determined, "Don't think I won't". We turn and head up for number 2. Within about 1 minute here comes speed demon Kris! I yelled as she passed, "Sandbagger....you need to go down farther"! The second repeat seemed easier. I reached my landmarks about 30 seconds faster than the first go....now that is something for me to get very excited about. At the top I was 1 whole minute faster! Great day of training. 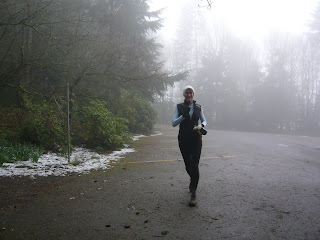 Sunday was supposed to be 5 hours in the gorge and Stacey and I had plan. At about 3 p.m. in the afternoon the sky's opened once more dumping pounds of hail on Portland then after that lots of rain and snow mix. Ring, ring, ring goes my phone and it's Stacey in her car laughing so loud I could barely make out what she was saying. No way were we going to get out to the gorge on Sunday. If it's near freezing in Portland and there is any precipitation that means snow in the mountains! We figured we would be spending all day dealing with a lot of ice. The snow wouldn't be so bad but the icy rocks would be slow going. We decided to use Forest Park for our 25+ mile run and use the fire lanes for hill work. I came up with a 26.88 mile route that I thought we could do under 5 hours so the plan was in motion. It was freezing in the morning and off and on snow but at least it wasn't raining. We headed out for the first 12.5 miles up and over the highest point and back to the car fo 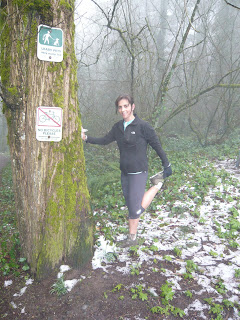 r a re-fuel. The trail was the sloppiest I have seen it in a long time......isn't it almost April?????? We worked hard on the 12.5 miles and climbed nearly 2000 feet on very tired legs. We got back to the car, switched some clothes, picked up more fuel and as the sun peeked through we were off for the last miles. This next section would be the muddiest of all leaving our feet sinking about 4 inches in soft stinky slop. We are generally very accustomed to running in water and mud in the PNW but this late in the season the mud is supposed to b a thing of past.....well not this year. Our legs twisted and turned as we pushed the pace leaving already tired legs beat! The last hour of the run was an ultra moment. A time when you are just spent but you can't give in to the notion of being done because there are more miles to travel. We had one more fire lane to conquer then 2 miles of mud back to the car. We continued to fuel but instead of being very focused we became rummy and everything was funny when nothing was really funny??? It became one of those times when your muscles sort of feel like mush but the contraction needs to be there so when your running you have to remind yourself to flex into the landing not peg leg through. A time when you're not sure if your legs are alive and will hold your body as you move slowly but think you're sprinting. We were both having a true ultra moment. Ahhhhh, the car was in sight and we have no energy to even change our muddy boots or take a picture of the mud fest. We just climbed in and talked about ice baths!
Posted by Ronda at 3:57 PM