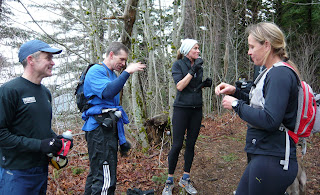 Before the afternoon snow showers in the gorge we got in 2:45 hours of running and climbing over 3,200 feet. It was nice be back on technical hilly terrain but my street legs struggled after about 1.5 hours of serious running. Tom was already out warming up when the rest of the gang arrived. For many of us it’s been months since our tender feet have felt the love of gorge trails. With the immense amount of snow this winter all our routes are touched if not covered with snow but Angels Rest was clear and so was the traverse over to the Larch Mountain trail. This was a perfect trip for my less than 3 hour run. Micheal, Kris, Stacey, Steve, Tom and I were all ready to get going and when we crossed the street for our 1,600 foot climb Tom was off like a rocket reaching to top in near record speed. The rest of us worked the climb but saved ourselves for the threshold hill portion to come at the end of the run. Even though Tom blazed the ascent he still showed no signs of slowing as he tore the technical downhills. All of us were commenting, wondering when his terror would end. Snow levels were around 2000 feet on Saturday but no precipitation was expected before noon. On the back side of the traverse we ran into our first small snow field but it was short lived.

My workout consisted of 3A and 3B for the first half then 2X10-15 minutes of AT work on hills with a 3 minute rest in between, pound the downs. The climb to Angles summit was uneventful and relatively easy. The traverse to Larch Mountain trail was fine but once we hit the switchbacks down I was a fumbling klutz! My feet were so out of place, my quads were quivering and I felt like a beginner. It seemed like yesterday we were on this trail cruising a lightening speed like we owned the place. Saturday I was a beginner but a really happy one.

Once we hit the Larch junction we turned and started the 2X10-15 minute threshold work. My HR needed to read 171-174 and I work 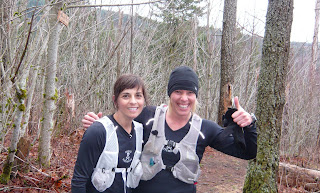 ed to get my legs to power my cardio again feeling like a beginner. The trail itself provided an almost perfect break for the 3 minute cool down. The switchbacks up to Angels traverse came at just the right time for the next 15 minutes. I love this section of the trail and I love switchbacks! The threshold was very hard and my legs felt spent but I managed to finish it just in time for the first snow flakes. The falling snow was beautiful but we all chanted, “Thanks for the pretty sight but please don’t stick”! The last 35 minutes of the workout was all downhill approximately 2000 feet of descent on good technical but blazing trail. I was pooped! My quads were spent and I pranced down that last 2.2 miles like Paris Hilton’s dog in a dress, prissy and ridiculous, it was embarrassing. When I was done I was completely satisfied and thought I my legs would be talking to me the next day for our 1.5 hour recovery run.

Since this is hill season we started our next day run at the Zoo. It was slo 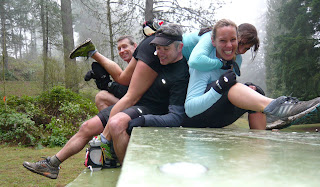 w but an absolute blast and to my surprise I wasn’t sore or too fatigued! Scott is a genius! He knows just how much is enough, pushing me to my limit but not quite over. We had a group dog pile just before we finished. Yes....Micheal looks likes he is in pain but I am not that heavy....come on, faker!

It was a great Build 1 training week. My body seems to be coming around after OC100K and after a bunch of medical tests last week that yielded good news I am feeling very alive!
Posted by Ronda at 5:04 PM